Shades of FEGS: Another NY Social Service Group Will Close Deeply in Debt

A major Queens-based nonprofit is closing down after racking up a tab of more than $7 million in unpaid federal and state payroll taxes, the N.Y. Daily News has learned. Steinway Child and Family Services, which provides services to children with severe mental health issues, is $10 million in the red, records show.

The charity, which was established in the ’70s, is in the process of transferring its programs to other social service providers and plans to shut down February 28th, according to an internal staff memo. Agency employees complain they haven’t been paid in weeks, and this is not the first time. The Daily News reports that the organization has, since 2008, subjected employees to pay cuts, unpaid furloughs and a failure to make payroll.

A review of the nonprofit’s IRS Form 990s offers some serious corroboration for the organization’s decline. First, in taking a look at revenue vs. expenses for the past 15 years, the trends are, on their face, alarming:

And in terms of liquidity, the picture is, if anything, even more disturbing. 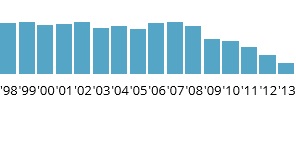 The 990 for the fiscal year ending June 30, 2014, shows the liability of $9,939,865. The supplemental financial statements (Schedule D) included in the 990 do not state that this is federal and state payroll tax, but it is listed on page 11 as the “Other liabilities (including federal income tax, payables to related third parties…)”. The 990s listed the liabilities a bit differently nine years ago, but there were accrued expenses of over a million dollars that far back, which increased slowly over the years until the 2012-13 fiscal year. In that one year, the liability went from $3.9 million to $6 million.

One has to wonder what explanation was offered to the board. Did they not consider it a huge red flag? New York City still accepted contract renewals for the organization in 2015, even with liabilities approaching a revenue amount that wasn’t even covering current expenses. The City Record of January 9th, 2015, lists Steinway Child and Family Services Inc. as contract renewals for Health and Mental Hygiene through to June 30th, 2018.

We may have become numb or indifferent to stories like this: Another health and human services organization must close its doors as it becomes overwhelmed by debt seemingly overnight, although their financials demonstrate that is not the case. It’s another case that would benefit from review by the blue-ribbon commission of the Human Services Council of New York, convened to uncover reasons large organizations that have been fiscally sound and successful for years, like FEGS in 2014, end up millions of dollars in debt. With Steinway Child and Family’s failure following so soon after FEGS, there should be a good deal of material for a compare/contrast analysis, and more lessons for boards.— Marian Conway