Sharing Our Way toward Equality: Social Media and Gay Rights 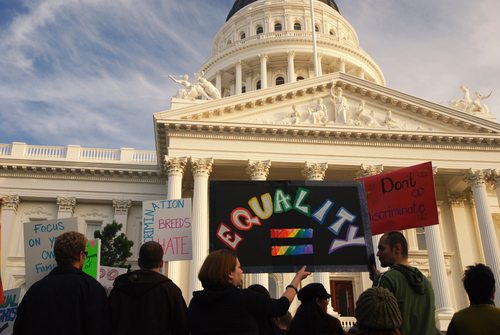 Since the moment that President Obama stated that he supports same-sex marriage, there’s been a flurry of social media activity, both pro and con, on the issue. It’s obvious by now that social media has played a huge role in shaping Americans’ attitudes toward LGBT issues. But I would go a step further. Despite the unavoidable struggles and setbacks that lay ahead, the inherent qualities of social media make the passage of same-sex marriage and equal rights for LGBT individuals and families inevitable. Here’s why:

1. Social media is about storytelling, and so is the movement toward LGBT equality.

“Harvey Milk knew it was imperative to tell our stories—that people would change their attitude about gays and lesbians if we were out,” says Shaun Osburn, deputy director of online content at Equality California. “We don’t always agree with the politics of the people on our friends list, but we can relate to each others’ families and the desire to love and be loved.”

Opponents of marriage equality can say that traditional marriage is under attack, but it’s almost impossible to imagine a personal, heart-rending story that supports this line. Through the It Gets Better Project, LGBT people have been able to share their individual coming-out stories.  Personal stories of same-sex couples are all over social media (see, for instance, this one). A few years ago, I was able to share my own personal coming out story via social media with high school friends I hadn’t seen in years.

“Seeing photographs of families in timelines, hearing about milestones in each other’s families and seeing the hardship faced by loving and committed couples has an incredible impact on how people think about lesbian, gay, bisexual and transgender people,” says Osburn.

2. The friend of my friend is…gay?

Facebook literally puts a human face on the LGBT civil rights movement. When I share photos of my partner and I and a far-flung friend “likes” those posts, her entire network of friends now knows that she knows (and apparently likes) someone who is gay. This network effect breaks down barriers between gay people and those whom we can enlist as allies, or at the very least, as friends.

“Instead of just posting a story about President Obama’s statement on same-sex marriage, I’m able to add a comment on what this means to me personally,” says Tony Pham, vice president of marketing at Life360, a mobile app with more than 15 million users. “Social media encourages people to create their own editorial, which then allows others in their network to participate in this dynamic conversation. The more that you talk about an issue like same-sex marriage, the more that it’s in the public domain and discourse, and the more that people outside of your own social circles will be exposed to opinions different from their own.”

It’s true that groups who oppose gay rights measures can also employ all of these social media strategies. But LGBT and progressive groups, such as the Human Rights Campaign and Netroots Nation, have had a head start in using these tools, and are now becoming more adept at engaging small, grassroots organizations in using them as well.

As Pew Research has shown, 63 percent of Millennials support same-sex marriage, while 30 percent of people born between 1928 and 1945 support it. The generation gap in support for same-sex marriage persists even among conservative political and religious groups. Nearly half of Republican Millennials favor allowing gay and lesbian people to marry, compared to less than one-third of all Republicans.

For the upcoming generation of digital natives, these attitudes have been shaped in large part through personal relationships with openly gay peers who connect via Tumblr, Instagram, Viddy, and other social networking platforms. As Sarah Audelo, senior manager of domestic policy at Advocates for Youth, states, “The thought that [LGBT] people should somehow be denied the same rights and privileges that straight members of our society often take for granted is a moral outrage. I think I am like the majority of my generation in that I don’t arrive at this position via ideology or politics: I arrive at this position from my personal experience with people around me and the core assumptions of empathy, equality and social justice that are the hallmarks of my generation.”

Harvey Milk said, “You gotta give ‘em hope.” While content that inspires strong negative emotions—such as anger or anxiety—can go viral, the stories with the greatest virality are those that inspire awe, which behavioral economists define as “an opening and broadening of the mind.” And positive content has been shown to be more viral than negative content.

Stories of righteous indignation in defense of the status quo may invoke strong emotions, but they lack the opportunity for emotional communion embodied in stories of personal transformation, such as President Obama’s retelling of his changing attitudes toward same-sex marriage. In other words, hope is more viral than hate.

For the LGBT movement, inspiring, affirming content has been instrumental in helping people evolve in their attitudes toward gay people and toward gay rights. There’s the story about the grassroots movement of LGBT supporters buying Girl Scout cookies in response to a Colorado troop’s decision to allow a seven-year-old transgender child into its troop. Or the backlash against J.C. Penney protestors, who threatened a boycott when the company chose Ellen DeGeneres as its celebrity spokesperson and ran ads featuring lesbian couples; the protests have actually helped the brand.  Or any number of viral memes and images that inspire laughter, joy, and hope.

“Social media helps people connect with others who are experiencing common situations and those connections foster hope,” says Jackie Cohen, director of social media and communications at Ticular, a consultancy. “We see examples of this in the LGBT community every time there’s major news on the same-sex marriage front. Posts on the topic fill up people’s news feeds, as everyone applauds the wins and boos the losses.”

There’s still a long way to go in the march toward the national legalization of same-sex marriage, let alone national LGBT equality. According to Equality California’s Osburn, “Both progressive and conservative movements are using social media, and quite effectively as well. While progressives seemed to have had the upper hand about five years ago, we’re finding that the gap has rapidly been closing.” Nevertheless, the tide on public opinion has shifted and will continue to shift. For LGBT equality, the writing is on the wall.