Medical anthropologist Adia Benton spent two years looking at HIV programs in Sierra Leone. What she saw unsettled her. “It calls into question what international programs like this do to people,” she tells us. Benton is an assistant professor of medical anthropology at Brown University and author of the forthcoming book, HIV Exceptionalism: Development through Disease in Sierra Leone.

HIV support groups in poor nations often urge members to disclose their status. Benton says this was an approach imported, in part, from vocal American AIDS activists of the 1980s. “Silence was equated with death, in the sort of ACT UP activism in the US. And when they gained ground in places outside of the US, those are the components that came with them.”

The public health benefits of disclosure are clear: it reduces stigma and transmission rates and can help HIV positive people feel less alone. Even so, Benton found many people just did not understand why they were expected to speak out. “People are very ambivalent about this because they want to contribute to public health but they also want to protect themselves,” she says. “I heard a lot of people, or leaders, pressuring others to be ‘good activists’. They wanted everybody to be a good activist and they wanted everybody to be a good advocate, and not everyone can do that.”

It was not just concepts about going public that were imported from the United States. Foreign money came, too. Billions of dollars poured into poor nations to fund HIV programs. It was an unprecedented global effort to combat one virus. This razor focused approach became known as HIV exceptionalism. “It’s the idea that HIV is an exceptional disease requiring an exceptional response,” Benton says.

HIV positive people were urged to join support groups; many received food handouts, transportation allowances, job training and life-saving medications. However, Benton says this approach had many downsides, which she details in her book. 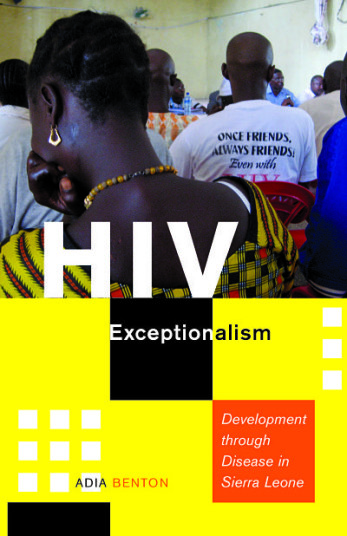 Even as she critiques aspects of HIV/AIDS care in Africa, Benton acknowledges that there are benefits. “One thing I don’t ever want to diminish are the gains that these kinds of programs made,” she says. “And, in fact, that’s one of the things that I say: it’s great for people who have HIV. It’s great to be able to access those drugs. Even though, I have to say, lots of people weren’t accessing them and there were a lot of missteps in these programs because they were trying to follow a template that didn’t necessarily work for Sierra Leone.”

More recently hundreds of millions of donor dollars have been committed to combating a new threat in Sierra Leone: Ebola. Benton says we should draw lessons from HIV exceptionalism and consider the bigger picture. “Is there a way to actually think about health systems without thinking about these vertical programs, that still can meet the needs of the population, and can still improve public health?”

What are your thoughts? When it comes to disclosure, how should we weigh personal privacy against the benefits of disclosure for public health? And when it comes to “exceptional” diseases, should some of the funding go toward better medical infrastructure for all?

Race and Immuno-Logics of Ebola Response in West Africa

Mother Jones: Should Not Disclosing Your HIV Status Be a Crime?

Huffington Post: HIV Disclosure for Young People: Are We Asking Too Much of Them?