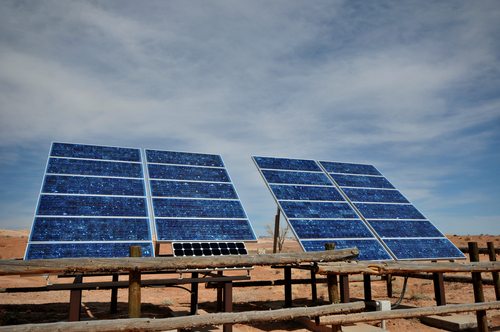 A writer for the Guardian describing the benefits of social enterprise’s potentially “ending energy poverty” pitches two interesting models: Off Grid Electric in Tanzania and Mera Gao Power in India. Off Grid Electric installs small solar systems in customers’ homes, through which they can get electricity for lights and for mobile phone charging. A daily fee paid through money transfer services accessible through mobile phone providers in East Africa activates the systems. In India, Mera Gao Power has chosen solar-powered microgrids serving up to 30 homes at a time instead of installing individual home systems. Fees from participating households are collected weekly by a technician. Off Grid serves more than 15,000 homes in Tanzania, while Mera Gao power has 20,000 customers.

The author, Anne Wheldon, describes both social enterprises as “proving that a business-like approach to increasing access to solar power is a win-win for both people and profit.” It is an odd statement, equating as goals the outcome of solar power access and the tool of profit. Presumably, the profit incentive in social mission terms is the tool that attracted private investors to ante up the dollars, not an objective itself.

However, some of the significant investors listed for Off Grid Electric have a strongly philanthropic character, including the World We Want Foundation, the Segal Family Foundation, the Mulago Foundation, the Marshall Foundation, and the Omidyar Network. Even some of the business and individual investors have strong philanthropic roots and identities, including Microsoft’s Paul Allen, a noted philanthropist who invested through his private capital firm, Vulcan Capital, and Josh Mailman, himself a well-known philanthropist, who invested through Serious Change LP. Mera Gao’s first investor, according to its website, was the U.S. Agency for International Development, whose support for Mera Gao included a $300,000 grant to install microgrids in the Sitapur district of Uttar Pradesh. Like Mera Gao Power, Off Grid Electric also received financial support from USAID’s Development Innovation Ventures program. Off Grid also receives support from the U.S.-Africa Clean Energy Finance Initiative, a program of the U.S. Department of State, USAID, the U.S. Trade and Development Agency, and the Overseas Private Investment Corporation. OPIC’s role, notably, is the provision of loan guarantees and political risk insurance.

Mera Gao Power and Off Grid Electric look like they are doing wonderful things to make clean energy available to poor households in Tanzania and India. But advocates of social enterprise should remember to acknowledge the crucial roles of direct (government) and indirect (philanthropic) subsidies in their financial plans. Otherwise, social enterprise will find itself lodged in the same self-delusional “we built it” position of the Republican Party during the 2012 campaign, promoting the idea that business achieved what it had without the involvement and support of government. Social enterprise advocates might want to more fully acknowledge their government and philanthropic partners in the articles they write for the mass media meant to explain how social enterprise works.—Rick Cohen