Yesterday, the Wall Street Journal disclosed that George Soros has over time donated $18 billion, or nearly 80 percent of his $23 billion in personal wealth, to his Open Society Foundation, making that entity second in charitable assets only to the Bill and Melinda Gates Foundation. The infusion is also larger than the total of the $14 billion Soros has given out since 1979, when he began his social activist democracy-promoting philanthropy.

Additionally, The Hill reports that the new chief investment officer at the Soros firm is now accountable to the foundation’s investment panel instead of to Soros. This suggests that the 87-year-old financier is actively engaging in his own succession planning and prioritizing the primacy of the foundations network in that. From its own budget overview, we get the picture of a distributed organization with a single intense core mission:

Although we are not the largest international foundation in terms of budget, no other philanthropic organization employs so many people in so many places. In the fields we work—good governance, human rights, democratic practice, education, economic advancement, public health, journalism, justice, and more—our staff colleagues and board members provide a depth of local knowledge that allows us to assess needs and opportunities with nuance and respect for context. Our large investment in staff and boards reflects our belief that the people directly engaged in a place or in a field are best positioned to guide our investments.

As we have written previously, Open Society functions more as a commonly funded international network of organizations operating through 47 offices in 42 countries than as a single entity. Still, the foundation has announced it will not immediately increase its grantmaking activity or dramatically expand its programming. That spending, then, will remain at the modest $941 million or so it is spending this year on issue areas and in a variety of ways detailed on its website: 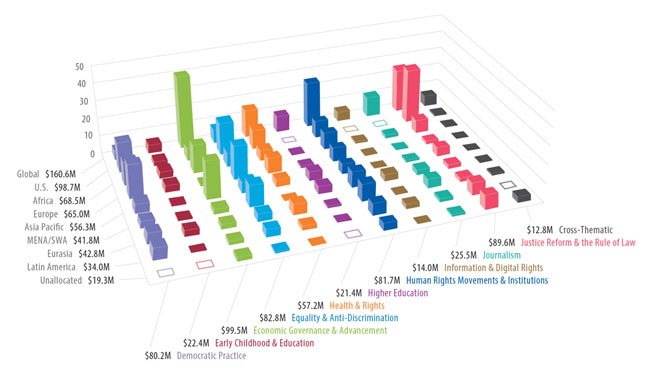 The budget includes $517.2 million for grants and other direct program costs, $60.0 million for Program Related Investments, plus reserves of $103.8 million, available to be allocated quickly throughout the year for unanticipated opportunities. While we continue to make many large grants to some of the most dynamic organizations in the fields where we work, we remain determined to support small- and medium sized organizations, informal associations, and individuals.

With all of the noise about Soros on a political level, it is easy to miss the well-designed processes for grounded, distributed yet mission-driven decision-making within the foundations themselves.—Ruth McCambridge