Soros Network of Foundations to Convene 200 Advisory Board Members 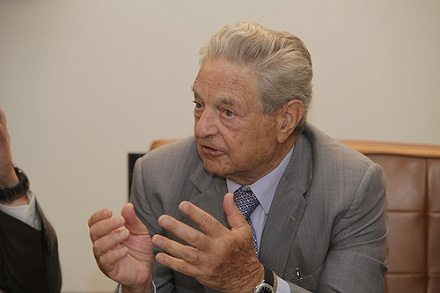 This week, political activist, commentator and philanthropist George Soros will convene 200 members of the advisory groups for the Open Society Foundation. Topics to be addressed are global poverty, health, climate change and conflict. The Open Society Foundation, which gives away somewhere around $1 billion each year, is a worldwide network of autonomous groups but its structure is reportedly relatively flat.

The author of this article, Diane Stone, who is a member of the sub-board of the Think Tank Fund of the Open Society Foundations network, describes it as follows:

“In contrast to other large private foundations, the Open Society Foundation is run as a horizontal international network of autonomous groups. OSF grew not as one institution with a single head office in New York, but with a flat structure where the national bodies and the initiatives are free standing and often operate independently with their own sub-boards. It is both an operational foundation, delivering its own programs, and a grant-making body.”

The network’s more than 40 offices around the world function in various cultural and regulatory environments and on different primary issues, reports Stone, and so this will be an attempt to achieve a coherent conversation among the parts. Soros himself commented on the need for a linking of the various parts in the New York Times last year when Christopher Stone, formerly of Harvard University’s Hauser Center for Nonprofit Organizations, took over as the president of the foundation. “We have a very complex organization,” said Soros at the time. “It has become too complicated, and it needs to be streamlined, to become more unified.”

The same Times article, however, suggests that the foundation had worked well in the past, even in its loosely linked state, because Soros and the previous president, Aryeh Neier, knew “all its nooks and crannies, but to hand it over to someone else would be very difficult.” Sounds like a not uncommon problem in leader transitions.

It can be very difficult to try to create greater unity in a diversely constituted, looser network, but the values system may be a strong enough attractor to aid in the endeavor. We’d love to hear what others who are in the know think as this situation progresses. The goal of the network overall is to promote a free and open society. –Ruth McCambridge