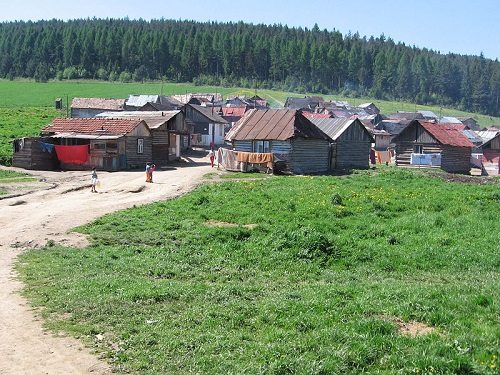 Because they lived on the outskirts of society back then, no one really knows how many of Europe’s Roma—pejoratively called “gypsies”—were killed by the Nazis during World War II. Herded into concentration camps like the continent’s Jewish population, between 25 and 75 percent of Europe’s Roma population may have been victims of the Holocaust.

The Roma are not often on the radar screen of Americans, but they should be. There may be 10 to 12 million Roma still living in Europe, most in southern and eastern Europe, with six million actually within the boundaries of the European Union. For many Roma, they still face rampant discrimination, the effects of which are seen in the statistics that 90 percent live below the EU’s poverty levels and at least one out of three adults is unemployed.

While not much of an issue for most Americans, the challenges faced by the Roma have been repeatedly recognized by Amnesty International:

“Hundreds of thousands of Roma have been forced to live in informal settlements and camps, often without heating, water or sanitation; tens of thousands are forcibly evicted from their homes every year. Thousands of Romani children are placed in segregated schools and receive a substandard education. Roma are often denied access to jobs and quality health care. They are victims of racially motivated violence and are often left unprotected by the police and without access to justice. This is not a coincidence. It is the result of widespread discrimination and racism that Roma face throughout Europe. Governments across the region are failing to protect their rights.”

While there aren’t many U.S. grantmakers paying attention to the needs of the Roma, George Soros, through his Open Society Foundations, is. While he notes that the conditions of the Roma have improved over the years, in part due to the work of the Roma Educational Fund, which Soros created in partnership with the World Bank, and the EU’s Structural Funds, more has to be done to rectify the inequities faced by the people in what constitutes Europe’s largest minority group. He makes three suggestions for continuing the progress that has been achieved by the Roma:

In his opinion piece, Soros makes a very intriguing comment: “If these programs could be scaled up with the help of additional EU Structural Funds, the Roma could, within a generation or two, be as well integrated in Europe as African-Americans are in the U.S. today.” While many African-Americans have been able to enter the American middle class, African-Americans in general, as we have demonstrated in repeated writings, lag behind whites and even other minorities on socio-economic indicators across the board. Hopefully, progress for African-Americans here and the Roma in Europe will progress from discrimination past inequity to equality. The Roma have a long way to go, and in the U.S., so do many people of color.—Rick Cohen