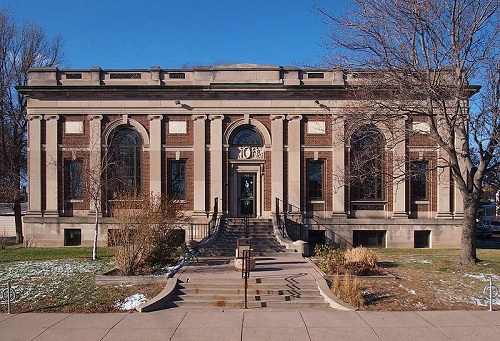 In March, the Arlington Hills Library in St. Paul’s East Side, built in 1916, moved its collection to a larger facility in a nearby community center. The former Carnegie library, which was placed on the National Register of Historic Places in 1984, is in need of a new roof and other building improvements. But that didn’t stop Macalester College professors, East Side residents and husband and wife Peter Rachleff and Beth Cleary from signing a 15-year lease with the city of St. Paul to convert the space into the East Side Freedom Library, a new nonprofit conceived as a home for physical and archival materials relating to the popular history of the East Side, as well as a “commons” where residents will be invited to gather to share their personal histories.

Rachleff, a labor historian who recently retired from his teaching position, says that “since 1850, the East Side has been a destination for immigrants and migrants seeking jobs, homes and new communities. A central premise of the East Side Freedom Library is that it is difficult for people to work together effectively if they do not know their own or each other’s stories.”

According to the organization’s website, “Story is a major theme of the ESFL, and the telling and gathering of stories, through formal interviews, workshops, and small-scale public performances, will allow local residents and interested publics to learn more about the work and residential histories of the East Side.”

Which is where Cleary’s background comes into play. Although programming will be somewhat limited until the roof is replaced, since signing the lease last month the new organization has already presented a Juneteenth celebration as well as a dramatic reading and discussion of a Frederick Douglass speech titled “What Does the Fourth of July Mean to the Negro?” That speech was originally delivered by Douglass at Corinthian Hall in Rochester, New York, a hall “built by and for working people to educate themselves,” according to the MinnPost article, and a building that in many ways was like the Arlington Hills Library in scale and grandeur.

The inspiration for the East Side Freedom Library was the Hatch-Billops Archives, which began as a small private collection of African-American cultural arts materials, but is now one of the most comprehensive archives of its kind, housed at Emory University.

The name of the new institution is meant to give a nod to “the free movement of knowledge and resources during the most active period of the Civil Rights Movement in the U.S.” while at the same time honoring the building’s past and Andrew Carnegie’s vision of neighborhood libraries as “republics of letters.”—Eileen Cunniffe