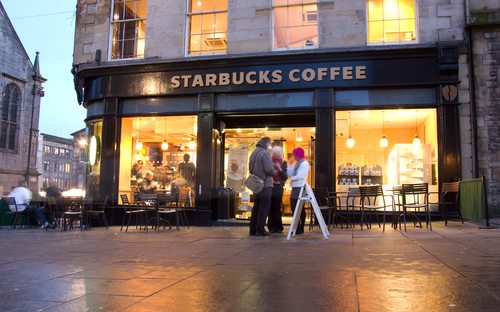 Last week, Starbucks ranked in the top 10 corporations making social media buzz, based on the Social Business Index ranking of 30,000 corporations conducted regularly by the Dachis Group.  The write-up attributed much of the buzz to the 9.3 million fans of the company’s Frappuccino Facebook promotion, but also noted another contributing factor, the Starbucks Vote.Give.Grow campaign that allowed Starbucks customers to vote on distributing $4 million to 124 community improvement nonprofits in a couple of dozen states.

While some corporate philanthropic grantmaking contests seem to favor incessant self-promoters who spend oodles of time sending e-mail blasts asking everybody in the world to vote for them, we didn’t see the same kind of trolling for Internet votes in the Vote.Give.Grow campaign. It might have been the nature of the 124 groups that received awards, for the most part community-based organizations less focused on PR campaigns than they are on building upon their strong track records of actual service to underserved communities.

While you can see the winning groups in your region by connecting to the Vote.Give.Grow website, some of the awards have appeared on the Internet and the recipients warrant congratulations:

A number of groups with long track records of service to low income neighborhoods, not new fly-by-night groups, also got recognized in the Starbucks campaign, including but clearly not limited to: So Others Might Eat, providing assistance to the very poor and the homeless in metro Washington, D.C. ($35,000), the Community Action Partnership of Northwest Montana, a community action agency ($15,000); the Interlakes Community Action Partnership serving eastern South Dakota ($15,000); the Argenta Community Development Corporation in North Little Rock, Ark. ($10,000); the Mountain Association for Community Economic Development serving central Appalachia ($15,000); FOCUS:Hope, doing workforce development in Detroit ($35,000); Brand New Day, a community development corporation based in Elizabeth, N.J. ($10,000); CommunityWorks, doing affordable housing and community revitalization programming in North Dakota ($10,000); Empowering and Strengthening Ohio’s People, a great community organizing and anti-foreclosure advocacy group which started in the Slavic Village neighborhood of Cleveland, and which we’ve profiled in the NPQ Newswire ($20,000); Over the Rhine Community Housing, a longtime affordable housing development group in Cincinnati ($10,000); Stop Wasting Abandoned Property, a community development corporation in Providence, R.I. ($10,000); Total Action against Poverty, a community action agency in Roanoke, Va. ($25,000); and the Miami Beach Community Development Corporation, doing affordable housing development in and around the Art Deco area ($15,000).

There were also a number of multi-region or national groups that also got funded on the list, such as the Opportunity Finance Network, the trade association and technical assistance provider to community loan funds and community development financial institutions. This reflects Starbucks’ commitment of to the CDFI industry in general and a recognition that providing assistance to networks is an important way of delivering help to the members of networks.

The Starbucks Vote.Give.Grow initiative gave visibility to the community-based nonprofits that don’t typically get many star turns (full disclosure: GOOD helped Starbucks with this process, and NPQ board member and frequent feature writer Cindy Gibson was asked to help GOOD). It may seem like small dollar grants to these groups, but they are now in the Starbucks list eligible for more “votes,” and they benefit from the “good housekeeping” seal they got from Starbucks customers.—Rick Cohen