As a matter of policy, this nation recognizes the importance of early childhood education. After sagging under the weight of the Great Recession, last year saw overall government funding for pre-K programs finally recover and surpass 2007 levels. In addition, overall enrollment grew in the programs that are the foundations for quality education.

That’s the encouraging news to be found in the recently published “State of Preschool 2016” from the National Institute for Early Childhood Education Research (NIEER). But the national perspective masks great variations in funding and quality from state to state. NIEER remains concerned that too many children are unserved or underserved in programs that don’t reach excellence.

W. Steven Barnett, the director of NIEER, noted this improved funding picture in an interview with Education Week: “It’s the first year that we really see a clear bounce back from the recession. Spending is up considerably over pre-Recession levels for the first time.” Total spending by Federal, State and local governments surpassed $7.5 billion ($5,000/child) in the 2015–16 school year, an increase of more than $.5 billion from 2014-2015. Total pre-K enrollment increased to 1.4 million children.

Location matters—educational opportunities are not equal for all children. Drilling down into the data gathered by NIEER shows how uneven our commitment is. Overall, more than 30 percent of all four-year-olds are in state-supported pre-K classrooms; in 14 states, enrollment tops 50 percent of age-eligible children. Yet, there are seven states that do not fund any pre-K programs and eight more where less than five percent of their pre-K population is served. Children in those states have a much harder time getting the advantages of an early step up the education ladder, particularly those who cannot afford private preschool experiences. 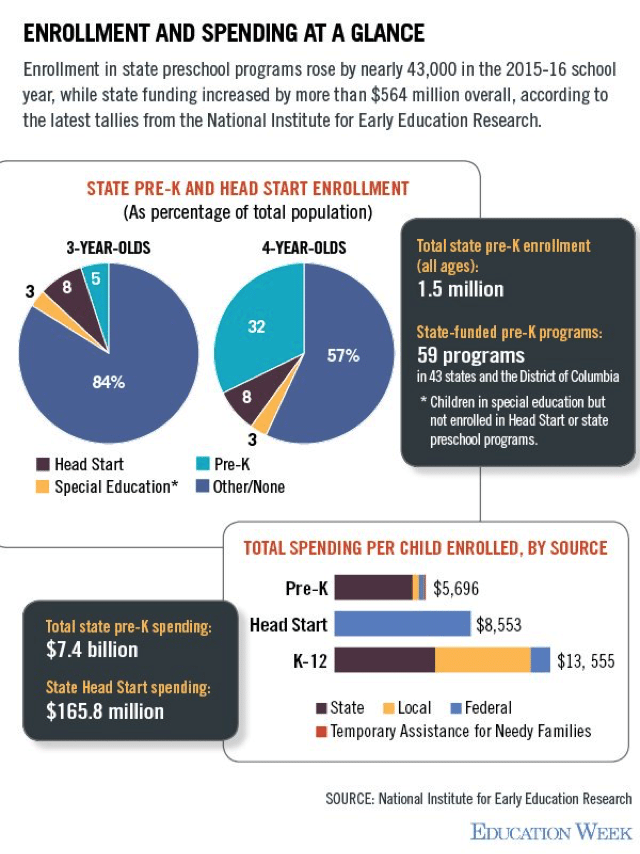 Having programs in place for every child is just the beginning. Ensuring that these are quality educational experiences is the real objective. According to NIEER,

Some states have minimal policy standards in place to support quality in preschool education. Children in states that have done little or nothing to provide high-quality early education, such as Florida and Arizona, have been left far behind. Recent studies have found that poor quality can render preschool programs ineffective at best, or even harmful. Research over the past decade indicates states must do more to support quality beyond providing adequate resources. Policies are needed that assure good teachers are providing engaging, intentional, and individualized education for every child.

The growth of funding is a positive sign, but the quality deficits tell us that we are still not spending what we need to spend. NIEER’s Barnett put it well when he told Education Week, “It’s not just about providing seats…they have to be high quality. You can’t just articulate high standards—you have to actually put money behind it.”

At the current funding levels, another $16 billion – more than tripling the current national spending – would be needed to guarantee every four-year-old child had a state-supported program to attend—to say nothing of the quality of that program. Research for Action, a Pennsylvania-based nonprofit, recently published a study of the economics of early childhood in Pennsylvania and the struggle to afford excellence. The Philadelphia Business Journal summarized RiA’s findings in a few words: “Revenues were 30 percent lower than costs.” To cope, providers are forced to compromise their standards. Classroom size increases and teacher qualifications are lowered.

If we want every child to have the best chance for educational success, ensuring access to a quality pre-K program must be one part of our effort. Considered in the context of the current level of spending on our public schools, approaching $650 billion, the amounts needed to reach this point seem affordable and would serve as wise investments in the success of the overall public education enterprise.—Martin Levine