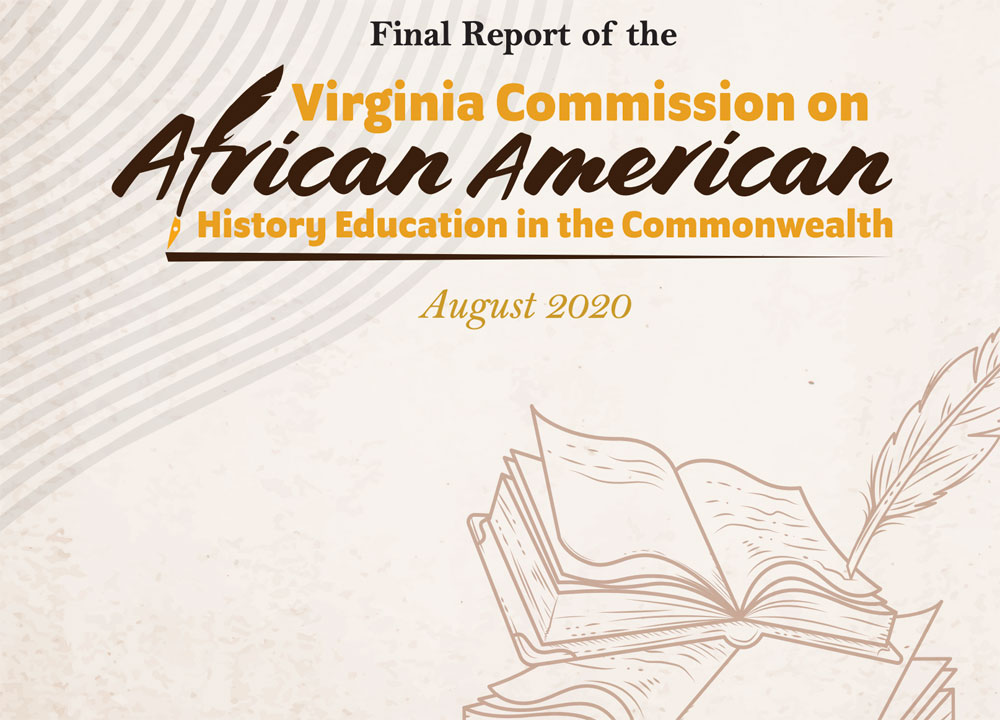 The Virginia African American History Education Commission, tasked with reviewing K-12 education history standards, concluded its year-long work with the release of an 81-page report this Monday that includes the finding that state learning standards “continue to be incomplete with regards to incorporating African American history into the larger narrative.”

The 34-member commission was appointed by Virginia’s governor Ralph Northam (D) in August 2019, in the wake of a scandal in which Northam admitted to having worn blackface while in medical school. Its members included teachers, principals, superintendents, policy experts, history professors, parents and community leaders.

To date, the commission report indicates, state standards have been “tainted with a master narrative that marginalized or erased the presence of non-Europeans from the American landscape.”

These historical silences skew our perspective of the past, erasing people of color, and supplanting them with false narratives that ignore the diverse cultural underpinnings in American society.

How so? The report provides many illustrations of how history has been whitewashed in Virginia’s K-12 schools. Take the Civil War. Current standards read as follows: “Cultural, economic, and constitutional differences between the North and the South eventually resulted in the Civil War…sectional tensions, originating with the formation of the nation, ultimately resulted in war between the Northern and Southern states.”

Notice, for example, how slavery is not even mentioned.

The commission suggests replacing the above description with the following: “Cultural, economic, and constitutional differences between the North and the South, all of them based in slavery, eventually resulted in the Civil War…sectional tensions over slavery, originating with the formation of the nation, ultimately resulted in war between the Northern and Southern states.”

Cassandra Newby-Alexander, who serves as dean of liberal arts at Norfolk State University, led the commission. She says the commission wants to make sure students have “a deeper understanding and comprehension of how African Americans were part of the American landscape from really the beginning.”

As Mel Leonor writes in the Richmond Times-Dispatch, a key goal of the commission is to ensure that Black history is integrated and incorporated into the core history curriculum. The commission further identifies 10 core themes to prioritize. These are:

As Leonor explains, “Virginia’s history standards won’t reflect the commission’s broader proposals for another two years. The state’s learning standards are revised on seven-year cycles; history was last revised in 2015 and is due for revision in 2022.”

The commission is proposing some immediate adjustments be made, such as amending standards on how the cause of the Civil War is explained. These changes are subject to approval by state education officials.

“To think about the place of African Americans in American life is to make all American history more comprehensible, more honest and more accurate,” explains Edward Ayers, a historian, former University of Richmond president, and commission member. He adds that the revised standards make history “more sobering, but also more inspiring.”

The commission also recommends teacher training be revised to require “cultural proficiency efficacy” and proposes requiring that every Virginia educator enroll in cultural competency training by 2022.

For his part, Governor Northam has promised that the recommendations will be reviewed seriously.

“This moment in time has given us an opportunity to reaffirm our commitment to break down inequities, to commit to building anti-racist school communities, and to tell a truer, better, and more honest Virginia story in our classrooms,” he says.—Steve Dubb