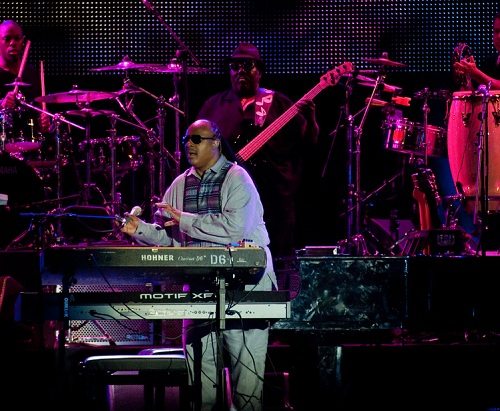 Who could not be moved by the presence of Stevie Wonder at the meeting of the United Nations General Assembly advocating for greater inclusion of children with disabilities in all nations? His colleague in this request was Nguyen Phoung Anh, a 16-year-old singing star from Vietnam who gained fame through her audition for Vietnam’s Got Talent. Performing across her country under the name “Crystal,” Phoung Anh has osteogenesis imperfecta, a brittle bone disease—that’s why she calls herself Crystal.

Phoung Anh came to New York for the General Assembly meeting to stand with Wonder on promoting policies to make this a “world of inclusion,” as Wonder described his mission. “What’s really important is for everyone with disabilities or others, is to be able to live in a society where miracles happen like Stevie Wonder—and he is a wonder,” Crystal added. “I think with support some developing countries, like Vietnam, who have not yet ratified the Convention on the Rights of the People [sic] with Disabilities, should really consider ratifying and make things happen.”

Stevie Wonder has been a star for so long that many people might not remember that he first achieved stardom as a teenager himself. Wonder’s obvious affinity for Phoung Anh is extremely moving and sincere. But their appearance isn’t just two celebrities from halfway around the world making an appearance about a cause that they’ll discard as soon as the klieg lights are turned off.

The problem of protecting the rights of persons with disabilities is a terribly serious issue, and not just in the fact that the U.S. is acting so silly in fearing that it will somehow sacrifice elements of sovereignty if it signs the CRPD. The UNICEF report, State of the World’s Children, is an incredibly powerful and distressing report that those of us without significant disabilities may not fully appreciate. Focused entirely on children with disabilities, the report deserves a serious reading, something that rarely occurs among the U.S. public where UN reports are almost completely ignored. Here are some quotes from the report:

“Children with disabilities are often regarded as inferior, and this exposes them to increased vulnerability: Discrimination based on disability has manifested itself in marginalization from resources and decision-making, and even in infanticide.”

“A survey of families of children with disabilities in the United Kingdom found that 70 percent thought that understanding and acceptance of disability among their community was poor or unsatisfactory, and almost half encountered problems in accessing such support services as childcare. According to a 2007 U.K. study involving children with special educational needs, 55 percent said that they had been treated unfairly because of their disability.”

“In Madagascar, one study found that ignorance about disability was common among parents—and that even among the presidents of parents’ associations, 48 percent believed, mistakenly, that disability is contagious.”

“Estimates of the additional costs of disability borne by families range from 11–69 percent of income in the United Kingdom to 29–37 percent in Australia, 20–37 percent in Ireland, 9 percent in Viet Nam and 14 percent in Bosnia and Herzegovina. Costs associated with disability include such direct expenses as medical treatment, travel, rehabilitation or assistance with care, and such opportunity costs as the income forgone when parents or family members give up or limit their employment to care for a child or children with disabilities.”

The UNICEF report is full of specific policy suggestions for improving the conditions of persons with disabilities and inspiring first-person accounts of individuals who have, with the help of governments, charities, and families, dealt with disabilities. Will any of this matter to the American public regarding the CRPD? Will Americans listen to the voices of Stevie Wonder and Crystal?—Rick Cohen