Struggling to Erase the Stigma of Trauma

I’m in the business of questions and answers — writing questions, procuring answers for our podcast. But when I take off my producer/editor cap and go about my personal life, these are the questions I get ad nauseam from strangers:

“What happened to your face? How’d you get those scars? Were you in a car accident?”

For those who don’t know, road bike racing was the tragic accident that happened to me — three increasingly severe crashes within two years. They damaged my skin, bones, brain, bank account, and worse of all – the way I felt about myself.

The first incident was on April 26, 2014 in Luray, Virginia. A women’s stage race left me unconscious. A witness explained that we turned a corner and were blindsided by a car parked in our narrow road. Several women ran into each other and took me down with them. I got a mild concussion, hip and arm abrasions, and a scar on my left elbow. I raced again the next week and placed third.

The second crash was on June 7, 2014 in Frederick, Maryland. It was a week after my very first win, so all I could focus on was winning again. During a hilly 70-mile training ride, I ran out of energy but kept pushing. Then everything turned black, and a medivac came for me. I had crashed downhill. My jaw broke in two places, my brain hemorrhaged internally, the left side of my face bled, my left eye blackened, a left molar fell out, and I gained five scars on my shoulders, left leg and right wrist. The concussion was paralyzing. I couldn’t turn my neck at one point, and I wanted to rip my brain out of its skull to stop the pain. Two months later, I completely healed, raced again and placed fourth.

The third crash was on March 22, 2015 in Ontario, California. It was my third criterium race of the day, and my first day competing against men. With only three laps to go, everything turned black again. An eyewitness explained that men in front of me ran into each other, and I ran over them. I broke my palate, nose and cheekbones. My upper lip got torn off, my right cheek was split open, three teeth cracked and one fell out, and my lung bruised. I was scared out of my mind when the surgeon showed me preoperative photos. If you want to see them, scroll to the bottom of this page.

By some wizardry, Dr. R. put me back together. I expected a full recovery in six months. It’s 13 months now, and I still have a long way to go.

My teeth were a quick fix: three root canals and fillings. I accepted the permanent hole left by the small front tooth that fell out. But I couldn’t accept my face. My upper lip was much larger than it used to be, and I had lots of red, bumpy scarring from my lip to my nose. Another long scar sat on my right cheek and a shorter one on my forehead. Everything disgusted me.

Here’s what I looked like two weeks before the crash versus nearly four weeks after the crash. 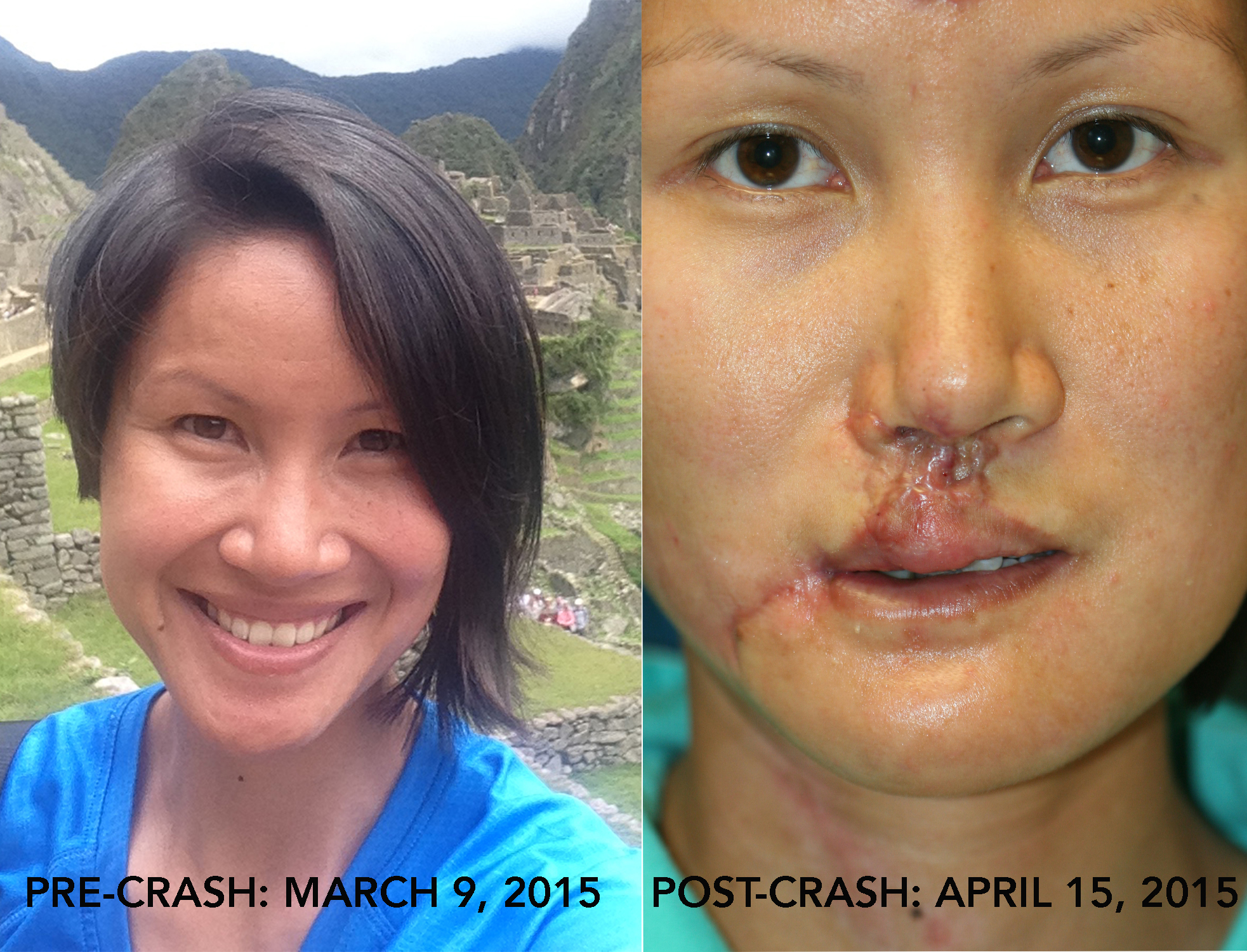 I’ve never really cared about the scars on my body, which were hidden under clothes anyway. But the face is personal. Nobody looks at your elbow when they talk to you. They look at your face. They identify and remember you by your face. I didn’t want to be known for “skid marks,” as described by a man at the archery range I frequented. I also didn’t want to see a regretful memory each time I looked in the mirror.

So I found an in-network surgeon specializing in facial trauma reconstruction. Examining my lip scar, Dr. W. explained, “If we don’t treat this, it’ll keep pulling your lip up until it’s in your nose.” There were different possible interventions with a scalpel, in addition to lasers that would remedy the other trauma on my face. The lasers were meant to break up scar tissue and stimulate natural skin cell production. Dr. W. asserted, “This is going to be a long road.” And during the whole way, I had to avoid UV rays since they’d aggravate scar tissue.

My first laser treatment happened in June. It was at the hands Dr. W.’s colleague, Dr. N., who said the procedure wouldn’t be that bad. Well, it was excruciating. The first kind of beam was like bright yellow explosives detonating on my face. “The second one is going to sound like a machine gun. Don’t be scared,” Dr. N. said. It sure felt like a machine gun firing at me too. The lasers came after 12 needle injections of anesthesia. I cried nonstop, even when driving myself home. How on earth could I endure another session like that?

I got seven more sessions. Dr. N. eventually switched to stronger numbing medication and procured a new laser that created no bloody wounds. But my body still cringed and eyes got teary.

Some friends said I remained “beautiful” inside and out, with or without scars. I appreciated their kindness, but I couldn’t believe them. Medical professionals refrained from the sugarcoating. “Your lip looks like a caricature,” proclaimed Dr. W. I was so ugly that I was funny. A phlebotomist observed, “You have a nice body, but it’s such a pity what happened to your face.” A pharmacist: “You’ll just have to suffer for now.” I doubt people would have treated me like that if I were a man. I rarely hear stories of the opposite sex getting unsolicited, callous comments about how they look … from those who don’t truly know them. And if people on the streets weren’t bad enough, media images suffocated me with impossible expectations. I thought I was ugly, and I thought the world was ugly for placing inordinate value on a woman’s physical appearance. So I often crawled under bed covers to shut out the world.

A handful of people told me to cheer up and stay positive. They were well-intentioned but unhelpful. You can’t tell me how to feel when you didn’t get your face lacerated and your heart broken … when you can no longer do something as simple as walking into sunlight. At the end of the day, I wrestle with this burden alone. Yes, I’m struggling. Please let it be.

Each medical procedure reminds me of what brought me here in the first place: road bike racing. Each laser, needle and scalpel makes me loathe the sport even more. I worked so hard for it — logging up to 300 weekly miles — and it misled me with podiums, then hurled my head to the ground. Again. And Again. But was I personally to blame? Or the other racers inches from my wheel? Or the friends who didn’t stop me from competing against men? Regardless, I feel insufferably betrayed by racing. And my anger boils over when I hear about another cyclist suffering a punctured lung, a broken collarbone, a shattered hip. These stories come regularly, and they MUST stop. No podium is worth my life – or yours. Yes, the glory is thrilling. But also highly addictive and destructive.

Don’t forget expensive. I paid north of $9000 in medical bills last year – with health insurance. The financial stress alone would take up a whole separate article — one I’m too exhausted to write. More bills have been coming for this year’s lasers and reconstructive surgery. On March 29, Dr. W. finally gave me the operation I desperately wanted. He performed a z-plasty, which modestly lengthened the height between my lip and nose, and eliminated the thick vertical scar bands. He also replaced the linear scar on my cheek with a zigzag one that’s supposed to be less visible to the human eye.

After I recovered, we were pleased with the results. Dr. W. said it was a “good baby step,” and I could have another surgery “down the line.” In the short term, he wanted me to continue lasers “right away.” So three weeks after reconstruction, I got my ninth laser session. As the surgeons scrutinized my face beforehand, Dr. W. said, “We’re gonna need to go crazy.” I couldn’t hide my dread. Dr. N. assuaged me, “It’s okay. It’s only a matter of time, Amy.”

But how many more months or years? How many more procedures? Nobody knows. On the one hand, I’m proud of how far I’ve come. On the other hand, I’m frustrated that the finish line is nowhere in sight. I’m trapped in a perpetual recovery, and sometimes I feel like I can’t take it anymore. But this is my life. So I try to not envy all the beautiful people I see. I try to savor my fleeting moments of joy, like laughing deliriously with a close friend or taking a short trip out of town. And mostly, I wait for …

… the end of these recurring medical treatments

… the freedom to walk in sunlight without a large hat, umbrella and/or bandages

… the day nobody has reason to ask, “How’d you get those scars on your face?”

… the relief of feeling good about my life again.

Scroll down if you want to see what I looked like after crashing on March 22, 2015. Warning: the images are quite graphic. 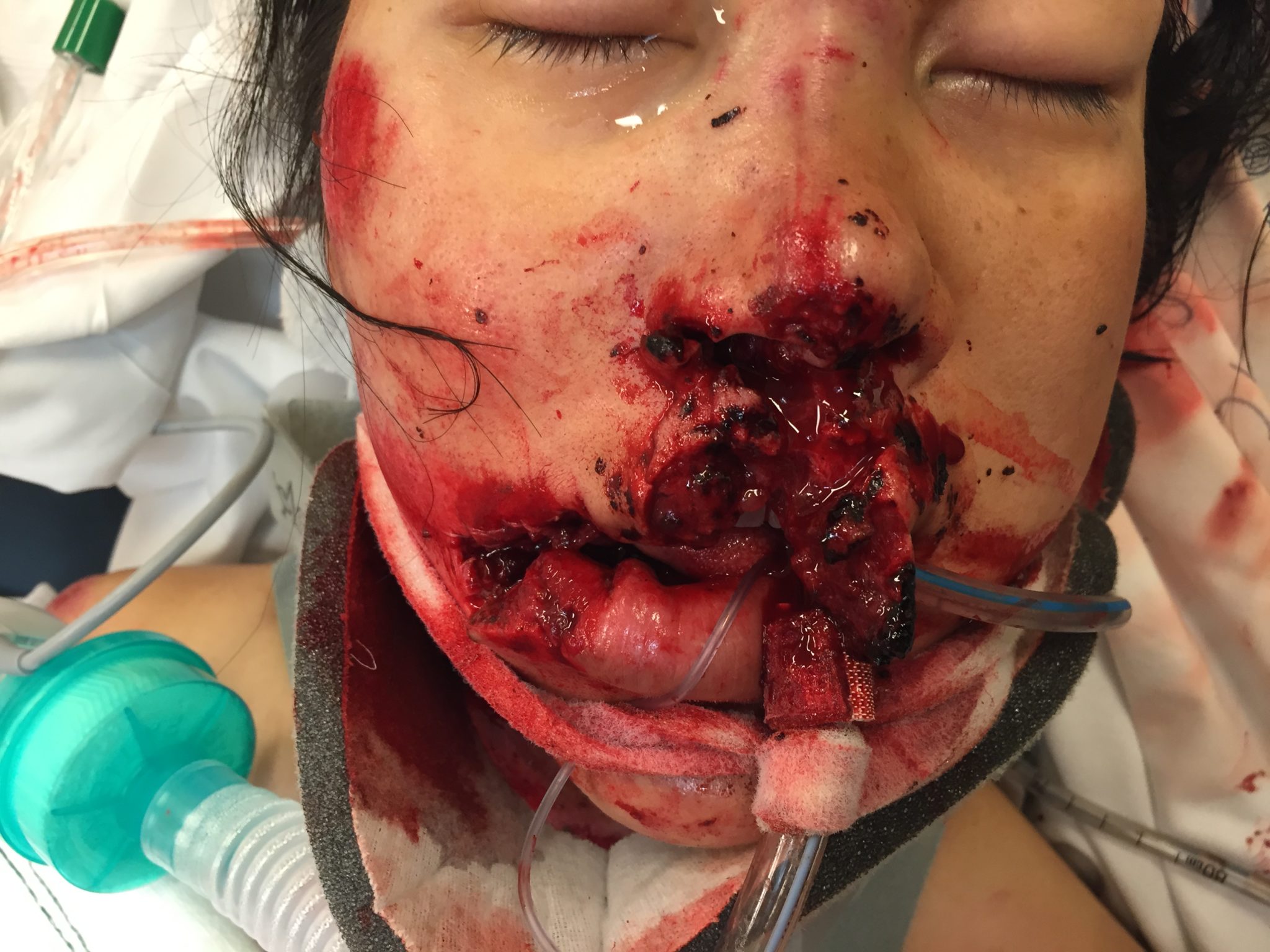 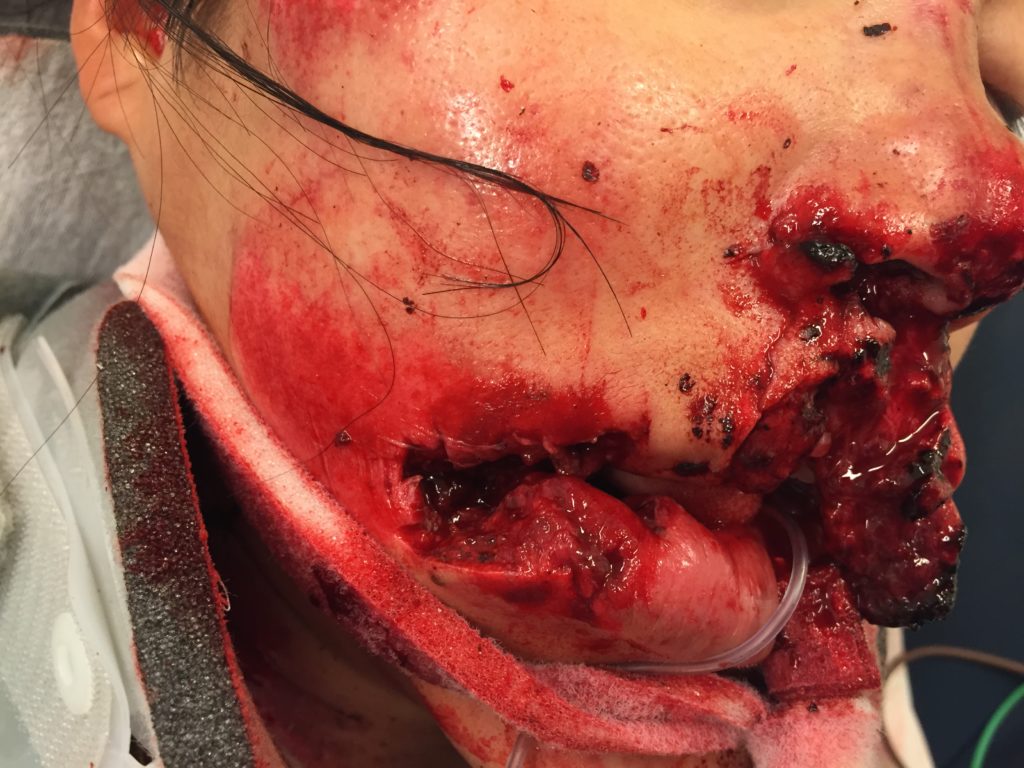