Student Debt More Onerous Depending on Gender and Race

One way Bernie Sanders might particularly resonate with young Black and Hispanic women is by emphasizing his stance on the relief of student loan debt. A just-released study of 2007–2008 graduates from the American Association of University Women (AAUW) shows that women pay off their student debts at a slower rate than men, and for African American or Hispanic women, the differences between their payoff rates and those of white or Asian American women are even more significantly. 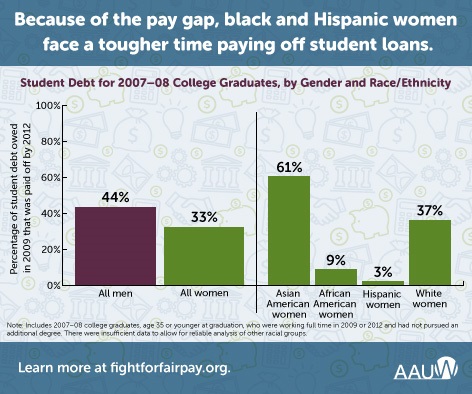 This, if you have not yet figured it out, infuriatingly correlates to gender and race gaps in salaries. According to the study, a year after graduating, women are paid about 82 cents on the male salary dollar while Black and Hispanic women make about 64 percent and 56 percent, respectively, of the salaries of white men.

The data also shows that 53 percent of women—compared to 39 percent of men—are repaying their loans at a rate higher than they can afford. “The gap in debt repayment may also make it more difficult for women to take risks that could pay off in the long run, like changing job sectors or starting a business,” the AAUW wrote in the report.—Ruth McCambridge