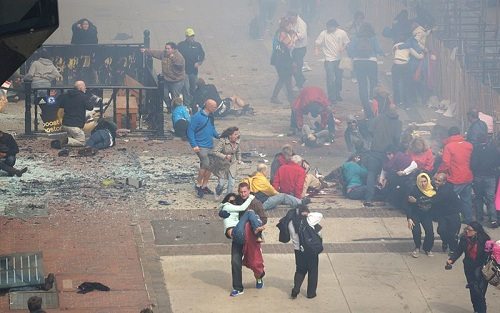 In Boston, when the bombing occurred at the finish line of the Boston Marathon, many rushed toward the scene to try to help, using their clothing as tourniquets, helping to transport wounded people and as the greater Boston region has dealt with the aftermath, we have seen that impulse turn into a longer and varied response.

If you just look at the fundraising it is impressively well organized. Within 24 hours the major fund appeared as Onefundboston. It was established within seven hours by ad agency Hill Holiday working closely with the Mayor’s office. Thomas M. Menino, of course, is Boston’s first five-term mayor, so he enjoys a lot of social capital that clearly can be deployed at a moment’s notice. “Boston is a big city, but it’s a small town,” Hill Holiday CEO Mike Sheehan commented, “When Mayor Menino wants something done, there’s instant cooperation and not an ounce of bureaucracy.”

The fund was announced on Tuesday afternoon by Mayor Menino and Governor Patrick, and as of Friday, it contained $10 million collected from a combination of corporations and individuals making online donations. The John Hancock Insurance Company put in the first $1 million. The fund has been placed under Kenneth Feinberg, the well-known attorney who managed the 9/11 Victim Compensation Fund as well as compensation funds for victims of the 2010 BP Gulf Coast oil spill and the mass shootings at Virginia Tech and Aurora, Colorado.

Because of the worry that disbursement of funds from the central fund might be slow, and because so many of the victims will need prosthetics—which can cost $40,000 per limb and are covered by only 70 percent to 75 percent of employer-sponsored insurance plans—a number of funds have been set up for individual families. GoFundMe.com has been to seen to raise more than $500,000 from 12,138 people in just four days, with the proceeds to go to Jeff Bauman, Jr., whose photograph was a dramatic part of the first coverage of the attack. Bauman lost both legs. The goal is $1 million. Celeste Corcoran lost both of her lower legs, and her daughter Sydney Corcoran had shrapnel embedded in her legs. Reportedly, that page had raised more than $450,000 toward a goal of $750,000 as of Saturday.

Another site, GiveForward.com, lets users choose among supporting 13 families affected by the bombing. Collectively, they have currently raised $719,957. Both websites take pains to weed out scam appeals and both deduct money from donations: GoFundMe.com deducts 5 percent and GiveForward.com deducts 7 percent. On the other hand, according to this post in a runner’s blog, no deductions will be taken from The Richard Family Fund, which has been established by friends of this family whose eight-year-old son Martin was killed. Mother Denise is in the hospital recovering from brain surgery, and his sister, Jane, has lost a leg.

According to the website, donations are collected via WePay and deposited directly into a special bank account administered by St. Mark’s Area Main Street. SMAMS is a non-profit member of the City of Boston’s network of local Main Street programs devoted to helping the local community.

There are countless other efforts going on to try to help the victims of the attack and the region recover. It all matters, and is gratefully accepted as investments in our collective future.—Ruth McCambridge