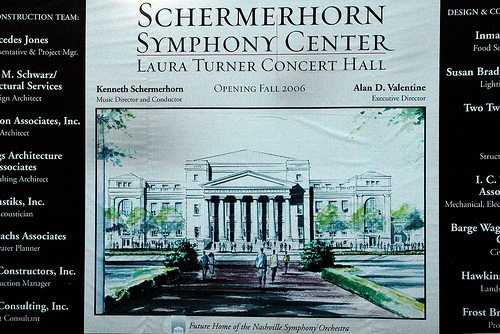 Sometimes, when you reorganize your business plan to account for a new set of market factors, you must also reconsider salary levels. Salaries are, for many nonprofits, a large portion of operating costs—and when salary levels are to be reconsidered, better start at the top. So it is with the Nashville Symphony, which almost had its new Schermerhorn facility auctioned off this year after it defaulted on the bonds used to build it.

Alan Valentine, the CEO, recently revealed that the organization has implemented salary and benefit cuts of up to 21 percent. Regarding salary alone, he said that both he and Giancarlo Guerrero, the orchestra leader, have taken cuts of 15 percent and other senior and middle management staff salaries were cut by 11 percent. Guerrero’s annual salary was $471,458 in the organization’s most recent tax return and Valentine’s was $381,920. Between the cuts to salary and retirement funds, Valentine and Guerrero have taken a cut of 21 percent. These compensation reductions lower the symphony’s budget by about $3 million. The organization has also reduced staffing by 47 positions.

Apparently, an outstanding loan of $83.5 million due to the Bank of America has been negotiated down to $20 million and transferred to another organization newly formed by the former board chair.

The orchestra still has negotiations with its musicians union whose contract runs out at the end of the month ahead of it but the salary cuts already made at management levels may buy the organization some cooperation.

In a related story, the Pittsburgh Symphony whose endowment suffered an the recession and whose state aid is much reduced just received a $1.2 million gift from Michele and Pat Atkins of Point Breeze who were struck by the fact that the musicians agreed two years ago to a 9.7 percent pay cut in the first two years of their contract. Their three-year gift of $1.2 million to the symphony to help pay for salary increases in the musicians’ new contract.

The gift is equivalent to one year of the pay cut, according to Pat Atkins. “We were moved by the actions taken by the symphony members when the times got tough,” he said. “They bent and said, ‘We want to make a difference.’”

Still, the Symphony has some fancy footwork to do to meet the requirements for a few major grants headed in their direction. They are not out of the woods.

NPQ would love to hear from other organizations that have cut top salaries. What were the factors and considerations in weighing that action? —Ruth McCambridge