This fall, Timothy Bartik took a comprehensive look at these incentives. Bartik, a senior economist at the W.E. Upjohn Institute for Employment Research, has been writing about tax incentives for close to three decades now. His latest book, released this past October, is titled Making Sense of Incentives: Taming Business Incentives to Promote Prosperity and can be freely downloaded at Upjohn’s website. As the title suggests, Bartik does not advocate the complete abolition of corporate tax incentives. The policies he suggests, however, would radically curtail their usage.

Part of the appeal of corporate tax incentives, Bartik explains, is that government grants to corporations make it appear to voters that politicians are doing something to increase the availability of local jobs. As Bartik writes, “Voters are more likely to vote for politicians who offer incentives, even if the incentives are unsuccessful. Voters appreciate well-publicized efforts to attract jobs. If a governor or mayor can go after a prominent large corporation with an incentive offer, why not? At least he is trying; he cares” (p. 3). However, the economic case for tax incentives is weak.

This is not to say that Bartik advocates avoiding incentives in all cases. What he does propose is that the cash incentives to corporations be strictly limited to two specific uses: 1) to encourage investment in regions with high unemployment, 2) to support “cluster development” of high-technology hubs. Otherwise, Bartik contends, support should be limited to programs that support skills development or extension services to manufacturing businesses.

Bartik’s book is useful, however, not simply for the policy positions that he adopts, but for laying out in straight-forward language just how our economic development incentive system works and why it is so dysfunctional.

First, Bartik defines the amount of economic development incentives. In the past, we have noted that cost estimates range from $45 billion to $90 billion—the latter figure includes not just direct tax abatements, but improvements (e.g., supportive infrastructure, such as new highways). Bartik, for his part, takes a narrow definition and comes up with an estimate of $50 billion a year, which he divides as follows:

How significant is $50 billion a year? As a percentage of state revenues, which total $1.7 trillion, the amount is modest, roughly three percent of spending. On the other hand, state corporate income taxes nationwide total only $48 billion a year, which is evidently less than state and local governments spend to “incent” business.

Bartik also notes that the averages can obscure variation. For instance, the $3 billion-plus incentive package for Foxconn in Wisconsin was “over 10 times the current average incentive offer” (p. 12). If the Foxconn standard became the norm, then tax incentives’ cost would rise to $500 billion or 30 percent of state tax revenues. In that case, Bartik warns, “either households would pay a lot more in state and local taxes, or public spending on schools and roads and other local services would suffer” (p. 12).

A second matter Bartik tackles is the overall economic impact of tax incentives. Commonly, in press accounts, you’ll read a passage like this one:

Amazon will get nearly $3 billion in tax breaks and other incentives to open one of its new headquarters in Long Island City.…officials are calling Amazon’s project the biggest economic development initiative in city and state history, as it is expected to create at least 25,000 high-paying jobs and generate $27.5 billion in tax revenue for the city and state over 25 years.

A casual reader might think: “$3 billion in expenditure for $27.5 billion in revenue? What’s not to like?” And, indeed, this is how corporate tax incentives are frequently marketed. But, as Bartik shows, such a calculation leaves out many factors. Properly calculated, the numbers look a lot different.

Among the factors that need to be considered are the following:

So, let’s look at the $27.5 billion that New York City would have gotten (in theory) had Amazon not scuttled its plans to locate 25,000 jobs in Queens. If 90 percent of the $27.5 billion goes to new expenses (housing, social services, education, transportation, etc.), then the net to the state is $2.75 billion.

And, well, handing over $3 billion to get $2.75 billion back over 25 years is not a bargain. Indeed, as a pure state revenue play (not including the value of the jobs themselves), the state is losing money. Again, this assumes that the $3 billion incentive was necessary, when most research (including, in Amazon’s case, the fact that it turned down deals many times more generous than New York’s) suggests that incentives are, typically, not the deciding factor in firm location.

The one-sided math would be laughable if it were not so ubiquitous. As Bartik sardonically notes, “Commonly used models…explicitly or implicitly assume that the ‘but for’ for any incented firm is 100 percent—none of the incented jobs, or any substitutes for those jobs, would have occurred in the state without the incentives. If one assumes incentives are 100 percent successful, is it any wonder that many evaluations of incentives are positive?” (pp. 36–37).

Despite all of this, Bartik ends up calculating that the average tax incentive, even using a more realistic “but for” figure of 12 percent instead of 100 percent, has a positive net economic benefit. At the same time, however, Bartik notes that returns to incentives pale in comparison with other available options. Bartik calculates that while the average corporate tax break has an overall economic return of $1.52 on the dollar, other policies have a greater economic return, which he nicely arranges in the following chart, taken from page 50: 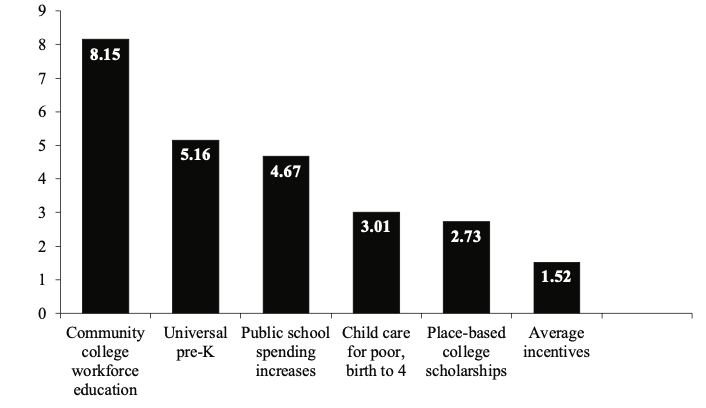 So, if, for example, economic development incentives come at the expense of funding for public schools, then instead of a net gain to society, there is a considerable net loss. As Bartik explains, “If an average incentive package is paid for by reducing K–12 spending—that is, without the property tax abatements and state tax credits, K–12 spending would have been higher by that incentive amount—then the benefits versus costs of incentives dramatically change. The benefit-cost ratio of this average incentive policy becomes minus 3.77” (page 51). Bartik adds that, “Financing incentives via public school spending cuts is not only bad for the overall state economy but also has disproportionate costs for lower-income groups” (page 52).

Even though Bartik concedes that most incentives are badly designed and basically subsidize businesses to locate in places they had already selected, noting at one point, “I was told by several firms, in not-for-attribution interviews, that the state and local incentives they received were irrelevant to their location decision” (p. 78), Bartik does see value in tax incentives when targeted to invest in low-income counties or to promote investment where high-tech “clusters” provide the chance for higher than usual economic spillover or “multiplier” effects.

Still, even here, Bartik suggests some guidelines to rein in runaway tax breaks. Among them are the following:

Do alternatives to throwing money at corporations exist? As Bartik’s analysis shows, many do—and most generate more quality jobs. At NPQ, we have noted that communities like Danville, Virginia and Plattsburgh, New York that invest in themselves rather than throw dollars at corporations do well. Bartik, for his part, talks about how Grand Rapids, Michigan has managed the unusual feat of increasing manufacturing employment since 1990 by focusing on customized job training, manufacturing extension, and infrastructure.

Broadly speaking, Bartik concludes that incentives must be “tamed.” This “requires some cutbacks” but “it also requires reforms.”

“The incentive animal needs to go on a more nutritional diet,” he says. “Only after such taming can incentives make sense.”

Philanthropy beneath the Hood: Why Investment Practice Matters

The Future of Work Will Be Democratic, Co-ops Say