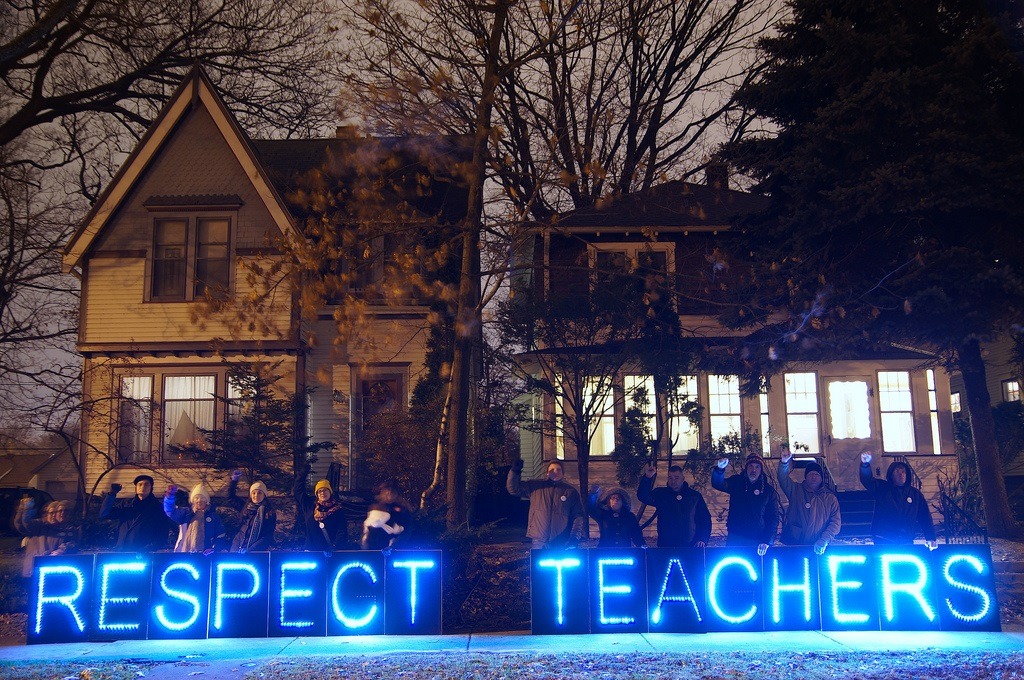 With school doors ready to swing open, school buses starting their engines, and school supplies getting packed into new backpacks, many school districts are still struggling to make sure that they have a qualified teacher in front of every classroom. As Motoko Rich described in a recent New York Times article: “Across the country, districts are struggling with shortages of teachers, particularly in math, science and special education.”

Specific examples of teacher shortages are easy to find. Rebecca Klein, in a recent Huffington Post article, found that “Kansas is suffering from a well-documented teacher shortage. Last year, more than 2,320 educators in the state retired, compared to 1,260 in the 2011–2012 school year, according to data from the Kansas State Department of Education. At the same time, 654 teachers decided to leave the state last year, compared to just 399 in 2011–2012. Over 270 open teaching and non-teaching school staff positions were listed on the Kansas Education Employment Board’s website.”

The AP found a similar picture in Indiana: “School districts…are having trouble finding people to fill open teaching positions as the number of first-time teacher licenses issued by the state has dropped by 63 percent in recent years.”

At the simplest level, the problem is easy to understand: Fewer people see education as a career choice. The number of people entering teaching training programs has declined precipitously. Nationwide, the drop was 30 percent from 2010 to 2014, according to federal data. In California, the number of people entering teacher preparation programs dropped by more than 55 percent from 2008 to 2012, according to the California Commission on Teacher Credentialing. Even programs like Teach for America, which provides an alternate path to teaching, are seeing their numbers fall. As reported in the Huffington Post, “TFA received over 44,000 applications for the 2015-2016 school year. Last year, the organization received just over 50,000 applications. The previous year, the organization hit a high of over 57,000 applications, topping off years of growth. TFA will have a new teaching corps class of about 4,100 this year, compared to around 5,300 the previous year and about 6,000 the year before that.”

So why is teaching not attractive enough to meet the demand for teachers?

Linda Darling-Hammond, professor of education at Stanford University and chair of the California Commission on Teacher Credentialing, recently offered her analysis on Diane Rehm’s NPR show:

“In the United States, in most places, if you want to go into teaching, you’ll have to go into debt, because there are very few financial aid supports to enter the most important profession we have—the profession on which all others depend…we treat education and teaching in this country much less well than many other countries do. Our teachers earn about 60 percent of what the average college graduate earns…in countries like Finland or Singapore or other leading achievers in the world, teachers earn as much as other college graduates.”

Rebecca Klein listed the ingredients for creating an unattractive teaching profession, which emerge from the hostile environment created by many school reform efforts. Among them were “rhetoric against teachers,” “lack of due process rights,” “finely diced repeated budget cuts amid a state revenue crisis,” “growing child poverty throughout the state,” and “low teacher pay.”

Others view the shortages more benignly. Another guest on The Diane Rehm Show, Chad Aldeman, associate partner at Bellwether Education Partners and former policy advisor at the U.S. Department of Education, sees the shortage as the expected reaction to the nation’s economic struggles since 2007. “When we see something like the Great Recession, when the unemployment rate went from about 4.5 percent to 10 percent, that’s 5.5 percentage points, and we can expect a large decline in the number of college students who are interested in education.”

Ross Brenneman, writing for Education Week, finds the situation just plain difficult to understand. “The labor force for teaching is too regional, really, too much of a patchwork approach to certification, licensure, and working conditions, to gauge what drives shortages in any given district.”

Yet it’s hard to think that the political battlefield that education has become, a battlefield that often makes our teachers the enemy, has not had a serious impact on the desirability of teaching as a life’s work—so serious that many would choose other paths. Frank Bruni described it well in the New York Times:

“The political battles over education, along with the shifting vogues about what’s best, have left many teachers feeling like pawns and punching bags. And while that’s no reason not to implement promising new approaches or to shrink from experimentation, it puts an onus on policy makers and administrators to bring generous measures of training, support and patience to the task.”

We are not going to ensure we have the teachers we want and need for our children if we cannot create an environment that values, rewards, and supports them.—Marty Levine