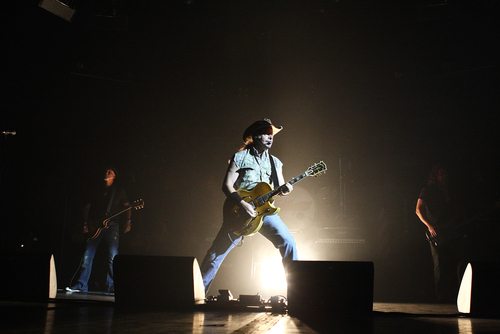 Longtime New Jersey activist John Atlas writes that Ted Nugent is a “decent guitar player, but a vile human being.” Nugent is scheduled to perform at the Wellmont Theatre in Montclair, New Jersey. Nugent will be greeted by protests organized by such activist organizations as New Jersey Citizens Action, other grassroots groups, and labor unions.

For those of us who remember the young Ted Nugent, he fronted for the Amboy Dukes in the 1970s, known to this author (who was a very young rock music reviewer for Fusion at the time) for a great song, “Journey to the Center of the Mind.” He spent a brief period in the ’90s as the guitarist for Damn Yankees, backing Styx’s Tommy Shaw and Jack Blades of Night Ranger. The much older contemporary Ted Nugent is a right-wing ideologue distinguished from many others by his propensity for offensive, vulgar characterizations of some prominent politicians.

Atlas notes that Nugent has referred to President Obama as a “subhuman mongrel” and a “chimpanzee,” characterized Hillary Clinton as a “worthless bitch,” and suggested that Senator Barbara Boxer (D-CA) suck on his machine gun. (Nugent is a vocal opponent of gun control laws and a board member of the National Rifle Association.)

The executive director of the Wellmont, Mark Josephson, acknowledged getting phone calls requesting that he cancel the Nugent performance, but said he wouldn’t do so, at least at the time of Atlas’s reporting. That isn’t always the case with Nugent’s performances. The Coeur d’Alene Tribe announced that has canceled Nugent’s performance at its casino in Worley, Idaho because it learned of his “racist and hate-filled remarks.

Nugent is taking advantage of his national SHUTUP&JAM! tour to expound on his political views on a number of topics. Last week, he waxed charitable about “good, hardworking, playing Americans dedicated to being as productive and generous as possible in their lives.”

“There simply is no more generous, giving, loving society on earth than hardworking Americans,” he wrote.

Atlas thoughtfully questions the pros and cons of stopping the Nugent concert, as opposed to simply using the event for protests. He concludes that protesting Nugent’s appearance in Montclair is important:

“I strongly support the upcoming protest against Nugent. He has a right to free expression under the First Amendment. But no matter what your political views, every citizen also has a right and in a democracy, a civic responsibility to protest bigotry and intolerance.”