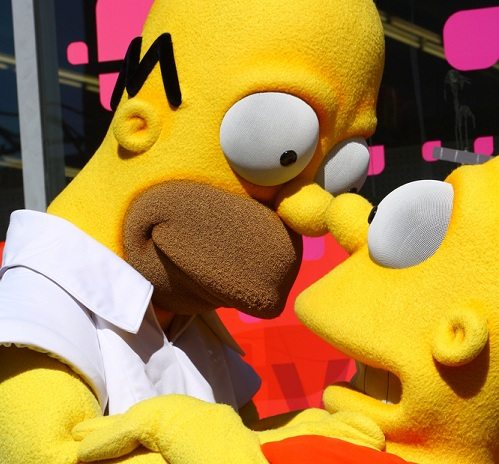 As co-creator, with Matt Groening and James L. Brooks, of The Simpsons, the longest-running American primetime, scripted television series, Sam Simon’s comedy credentials are second to none. The Executive Producer credit he retained after retiring from the show in 1993 (four years after its creation) has made him wealthy, earning millions every year in royalties, but that doesn’t concern him much…nor does his terminal colorectal cancer discovered five months ago. He is driven to devote his energies and fortune to many causes that represent his down-to-earth values, including establishing the Sam Simon Foundation to provide vegan meals to those in need of sustenance, and shelter and care for stray dogs.

Simon has been married twice, and is currently engaged to chef Jenna Stewart. His former wife, actress Jennifer Tilly, has the highest regard for his will to live to continue his will to give. “I think it’s really nice for him that he’s doing it now and he gets to see the results of his philanthropy. He really does have a passion to survive, and the longer he’s on the earth, the more good work he can do.”

Simon’s generosity to PETA has inspired the animal rights organization to name its headquarters in Norfolk, Virginia, the Sam Simon Center. He supports many other charities, including Save the Children and the Sea Shepherd Conservation Society, an international marine conservation nonprofit that has named a vessel used for scuttling whaling and illegal fishing the “M/Y Simon.”

Simon is humble and nonplussed by his many accolades, and his trademark wit never fades. “The sort of lifetime achievement stuff that I’m getting now is kind of like Tom Sawyer’s funeral, because they all know I’m sick. I am getting buildings named after me and awards and stuff. The truth is, I have more money than I’m interested in spending.”

Simon has week-on and week-off chemotherapy and still consults for Anger Management, the FX comedy starring Charlie Sheen. Simon is modest, but he doesn’t pull punches about his views about the charitable endeavors of his Hollywood brethren and what he calls cynical “mission drift.” Asked whether he’d say he was angry about his terminal cancer, he replied, “No. I don’t think that’s what karma is. It never crossed my mind. But I don’t think the spirit of Hollywood is such a spirit of generosity. I think people really begrudge giving. In New York, it’s like that. A lot of charities spend a million dollars on a fundraiser to make $15,000.”

Whether that is true, it is clear Simon tacks in the opposite direction; with no direct heirs, his generosity is his greatest reward. “I get pleasure from it,” he says. “I love it. I don’t feel like it is an obligation. One of the things about animal rights, which is not the only thing that I care about in this world, is that your money can bring success. I see results.”

Like the long-running Simpsons, which will undoubtedly carry on in syndication far into the future, Simon’s effect on the causes he supports extends beyond his financial impact and his legacy will endure.—Louis Altman