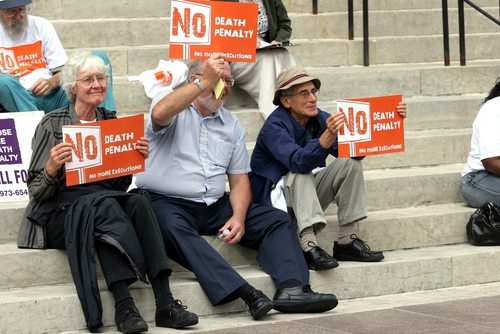 UPDATE: On the morning of Wednesday, December 3rd, the 5th Circuit Court of appeals granted a stay of execution for Scott Panetti, indicating, “We stay the execution pending further order of the court to allow us to fully consider the late arriving and complex legal questions of this matter.”

On December 3rd at 6 p.m., Scott Panetti is scheduled for execution by the state of Texas. Unless Governor Rick Perry commutes his sentence or a mental examination is conducted, Texas will most likely execute a mentally disabled man.

There’s no denying the seriousness of the crime Panetti committed. In 1992, Panetti shot and killed his estranged parents-in-law parents in front of his wife and their three-year-old daughter. However, the trial that followed was little more than a mockery of the justice system. Panetti represented himself during both the trial and the sentencing phase. He wore a cowboy costume and purple bandana to court, attempted to subpoena more than 200 witnesses—among them, the Pope, JFK, and Jesus Christ—and believed he was a character from a John Wayne movie.

One might almost suspect he was set up to fail, and sure enough, Panetti was convicted. The jury sentenced him to death after one day of deliberation.

“His demeanor was frightening to the jurors and they saw him as a crazy man. Some of the jurors said that had he been represented by counsel, they doubted that he would have been sentenced to death,” said Charles Ewing, a forensics psychologist and law professor at SUNY Buffalo.

Like most death row inmates, the next 20 years of Panetti’s life were marred by appeals and motions concerning his mental illness. These appeals would focus on the 30 years that Panetti suffered from schizophrenia, with which he was diagnosed at the age of 20. Panetti struggled to keep his life together while taking medication. He was able get married and start a family; still, his paranoid delusions shadowed most of his life. Schizophrenia is often a deteriorative disease, and Panetti’s illness grew progressively worse. His wife had him committed to a psychiatric hospital, then divorced him and left with their three children.

“She committed him, and she told the doctors that ‘Now he had this delusion about the devil,’” said Kathryn Kase, Panetti’s death penalty lawyer. “And like many people with paranoid schizophrenia, he developed a very specific delusion, and this was all about religion.”

On the night that he killed his wife’s parents, he shaved his head and dressed up in camouflage, personifying one of his hallucinations, the soldier Sgt. Ranahan.

How did this trial happen? How was Panetti deemed competent to stand trial, let alone represent himself? The 1986 case Ford v. Wainwright established a precedent to prevent defendants like Panetti, whose illness prevented them from discerning right from wrong, from being executed. However, Ford’s guarantee to the mentally ill, extending from the Eighth Amendment barring cruel and unusual punishment, is often subverted by delays in examining the inmate. Indeed, Panetti has not received a mental examination for seven years, during which time his disease may have progressed even further.

A wide variety of groups and individuals, from the American Psychiatric Association and the American Bar Association to Representative Ron Paul and former Texas governor Mark White have come together in their opposition to Panetti’s execution. Several nonprofits, like the Texas Moratorium Network focused on ending executions, nonprofit journalism site The Marshall Project, and the ACLU have been bringing attention to the case.

Last Tuesday, the Texas Court of Criminal Appeals denied Panetti’s emergency request for a stay of execution in a 5 to 4 decision. Judge Elsa Alcala wrote astutely in her dissent, “This Court, at best, deprives appellant of a fair opportunity to litigate his claims, thereby violating the constitutionally required procedural protections recognized in Ford. At words, this Court’s decision will result in the irreversible and constitutionally impermissible execution of a mentally incompetent person.” At the time of this writing, his lawyers are still scrambling to find some way to stop what seems to be inevitable.

As succinctly pointed out by Nancy Leong and Justin Marceau in their piece for the Atlantic, Panetti’s case is only one element of a long laundry list of issues with the death penalty. The botched executions of Clayton Lockett and Joseph Woods, the uneven administration of death sentences across the country, and the untrained professionals conducting the executions are more than worrisome.

We should not be waiting for Panetti’s name to join those of Lockett and Woods. Of course, Panetti would not be the first mentally ill man to be executed in Texas. He might join Johnny Frank Garrett, Larry Keith Robison, Monty Allen Delk, James Blake Colburn or Kelsey Patterson. However, he could also join Steven Staley, whose execution was successfully stayed after a judge deemed him, also a paranoid schizophrenic, incompetent to be executed.

We have the rare and often-wasted opportunity to prevent an injustice from happening. If Governor Perry does not intervene, we will be left with the much greater consequences of an ignored and subverted legal system doling out justice arbitrarily.—Shafaq Hasan