The Awkward Coevolution of Microhouses and Communities 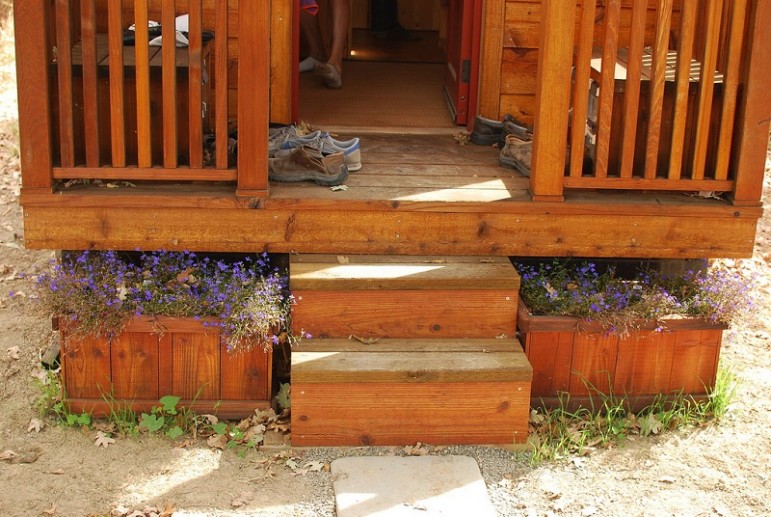 In an attention-grabbing story from the San Diego Union-Tribune, “Housing gift lands homeless man in jail,” a man was arrested for living in a microhouse donated to him by a charity. The San Diego nonprofit Jus Saying built the four-by-seven structure for Michael “Red” Clark. The microhome was parked in front of International Love Ministries of God, where, according to, “tents and temporary shelters on sidewalks can stretch an entire block.” San Diego police arrested and handcuffed Mr. Clark and towed the microhouse away. According to the report, Jus Saying director Andy Aguilar has 90 days to retrieve Clark’s house from the police. Aguilar told the Union-Tribune that he is looking for a property owner willing to accept the structure and let Clark live inside.

Police aren’t offering much information about the charges being brought against Mr. Clark and his microhome, so it’s unclear whether this is a case of the city wanting to move homeless people off public streets or just a reaction to an unlicensed home. San Diego is not unfamiliar with microhomes, though coverage of the topic in local media seems to focus on projects for Millennials and Do It Yourself (DIY) owners. In fact, a national conference on microhouses is scheduled in San Diego next year. Earlier this year, San Diego adopted a zoning ordinance for microhouses that should have gone into effect this month.

Many cities are wrestling with zoning and building standards for microhomes. Maggie Hodge Kwan wrote for the NPQ Newswire earlier this year about resistance to microhousing for the homeless in the Los Angeles area:

These tiny homes, or “shacks,” in the words of Buscaino, are small buildings on wheels. The average tiny home is the size of a garden shed, and each home is built on wheels so that it can be moved frequently enough to skirt laws against loitering or trespassing. While the homes offer shelter from the elements, they lack running water and washrooms. Finally, to be visible to drivers at night, each home would require reflective markings. For all of these reasons, Buscaino believes the tiny homes to be unsafe. Additionally, some of Buscaino’s constituents have raised another concern: It is unclear if tiny homes offer temperature control options to occupants.

In the spirit of the libertarian wing of the microhouse movement, Tiny House Design, a website for enthusiasts, has some suggestions for how microhome owners can avoid or sidestep zoning requirements. Entrepreneurs who are trying to make a business of building microhouses are working with local officials to create standards.

Microhouses are hot in the media because they seem cute and have DIY appeal and economic and ecological impacts. But are microhouses practical for the mass market? Some of the drawbacks:

Microhouse communities can solve some of these problems by providing amenities like parking, laundry, cooking, and socializing in common areas. Washington, D.C.’s Boneyard Studio provides an example. Where the residents were formerly homeless, such communal amenities might include social services. The Atlantic profiled a new microhouse community for formerly homeless people in Nashville.

The buildings are now set up, on wheels, in the backyard of the Green Street Church on Nashville’s east side, part of a sanctuary that also houses homeless people living in tents who moved from an encampment in one of Nashville’s parks that recently closed. The homes are brightly painted yellow, blue, orange, and purple, with red doors and white trim. They cost about $7,000 each to build, and measure 5-by-12 on the inside. Residents use bathrooms in the church, and shower outside with a hose. They eat donated food and drink coffee set up under a tent in the yard.

It is pretty clear that this solution is far from an independent living stuation. Still, now is a time of experimentation. Apodments, microhouses that move, are an example of emerging innovation, and accessory housing (aka “grandmother units”) tied to a “main” residence serve as another variation on the microhome theme. Kristin Capps in CityLab provides a thoughtful argument for supporting these experiments: “Micro-housing is neither a utopia nor a dystopia. It’s just creating smaller-scaled places for living that suit the times.”