Nigerian-American journalist Dayo Olopade spent two years traveling to seventeen nations across sub-Saharan Africa. In her new book The Bright Continent: Breaking Rules and Making Change in Modern Africa, she comes away with a decidedly promising view of the continent.

Olopade tells me she wrote the book, in part, as a rebuttal to this poster, which she saw at the United Nations a few years back: 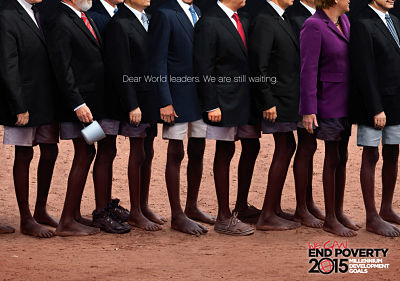 “For me, (the poster) was pretty shocking,” Olopade tells us. “Not just because it presumed all of the agency lay with the members of the G8 or the leaders of the free world. It presumed that poverty was a result of laziness, or that people who are less fortunate have somehow forfeited their right to say anything, to articulate where they come from and what they’re interested in.”

Olopade concludes that many African governments are corrupt or inept. As a result, she challenges the wisdom of many aid organizations that continue to work with ineffective governments. “If the government is irrelevant, and often it is, well then what is more relevant?” Olopade asks. She says we need to look to the informal sector because that’s where ordinary Africans are making progress without the help of government. 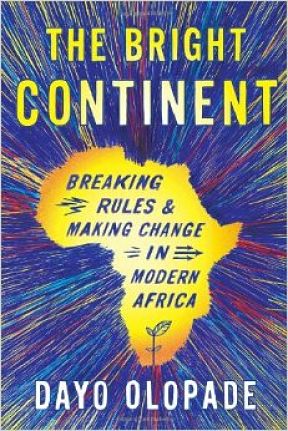 Olopade also champions the private sector as a way to lift increasing numbers of Africans out of poverty. “I’m unashamedly pro-capitalism as applied to sub-Saharan Africa,” she tells us. “And not just the wealthy people but all people.” Olopade says asking poor people to pay a small fee for services they want and need can be a highly effective path to progress.

As we look toward Africa’s future, Olopade says we must begin to actively engage with continent’s young people, who collectively represent a challenge and an exquisite opportunity. “With millions of Africans stalling in the march from youth to adulthood,” she writes, “figuring out how to harness their potential energy is the most urgent task of the next decade in Africa.” In this video for Olopade’s book, we hear some of those young people talk about their optimism for the continent:

The Bright Continent is filled with voices of promise like those in the video. “I invite the world to reimagine all of the challenges that you hear about in Africa as an opportunity to innovate,” Olopade says.

What about you? Have you seen specific paths to economic prosperity in Africa that deserve more attention? Do you think aid organizations should bypass governments and channel their support to private initiatives instead? What about the for-profit model as a way to bring about greater opportunity for people in developing nations?