“The Day We Fight Back” Will Be More Than One Day 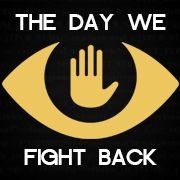 Newsweek reports that the Internet protest of NSA surveillance launched yesterday saw more than 5,000 websites participate through placing memes and banners on their sites. The effort was launched by Demand Progress as “The Day We Fight Back” and was backed by a broad coalition of activist groups and companies, including Access, Demand Progress, the Electronic Frontier Foundation, Fight for the Future, Free Press, BoingBoing, Reddit, Mozilla, ThoughtWorks, and many more.

David Segal, executive director of Demand Progress, which he cofounded with Aaron Swartz, said: “Today the greatest threat to a free Internet, and broader free society, is the National Security Agency’s mass spying regime. If Aaron were alive he’d be on the front lines, fighting back against these practices that undermine our ability to engage with each other as genuinely free human beings.”

As the protest got started many were likening it to the SOPA/PIPA protests, but as Brian Fung of the Washington Post writes, “today’s protesters face the much more challenging task. In 2012, protesters were trying to stop what they viewed as a bad bill. Today, they’re trying to push a positive legislative agenda. How the demonstrators fare could tell us a lot about the challenges of online organizing, as well as about the future of Internet protest.”

Still, he suggests, “Today’s protesters benefit significantly from the fact that the USA Freedom Act has already been introduced in Congress and has lawmaker support. They’re also backed by the tech companies that have substantial lobbying power on the Hill. If the bill passes, activists will be able to claim that their efforts at Internet organizing contributed in some measure to actual legislation, adding momentum for further actions down the road.”

For those unfamiliar with the USA Freedom Act, here is how the ACLU summarizes it:

The legislation seeks to rein in the NSA by doing the following:

Some believe that these steps are fine, but insufficient, as this fight may be one that will be waged on many battlefields over the next few years. According to Roy Singham, chairman of the global technology company ThoughtWorks, “Aaron showed us that being a technologist in the 21st century means taking action to prevent technology from being turned against the public interest. The time is now for the global tribe of technologists to rise up together and defeat mass surveillance.”—Ruth McCambridge