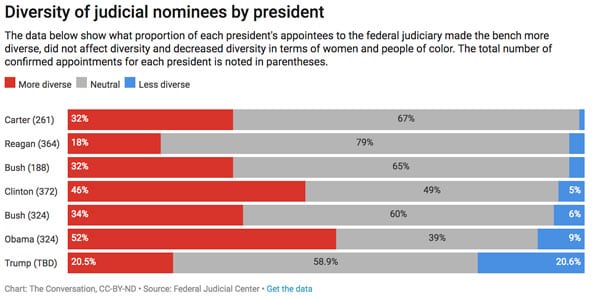 Last fall, NPQ took note of the import of the federal court system on the work of a diverse array of nonprofit organizations.

When the Trump administration was sworn in, it was presented with a chance to shape the nature of that court system that few previous administrations have had. As an outcome of the Republican Senate majority refusal to fill judicial openings during the last two years of the Obama administration, President Trump inherited the ability to appoint 25 percent of the federal bench. Five hundred days into his term, we now know that he is choosing judges who are young, conservative, and much less diverse than his predecessors.

Reviewing data developed by the Federal Judicial Center, Professors Rorie Solberg and Eric N. Waltenburg, writing in the Conversation, said, “Our last three presidents have valued diversity and appointed significant numbers of women and people of color. This trend still held true even while Democrat and Republican presidents were appointing ideologically aligned judges. President Trump is reversing this trend, and as a result, the bench is becoming more white and more male.”

Trump’s confirmed judges are only a small subset of all his nominees. However, they are a representative sample. Thus far, 90 percent are white and 77 percent are male. And only 19 of the 119 nominations he has made so far—confirmed and pending—add diversity to the bench, while 26 reduce diversity.

The political philosophies of judicial nominees get headlines as the Senate confirmation process moves forward. Mush less attention gets paid to the court’s ethnic and gender balance, yet it matters in the court of public opinion: “Diversity is critical to the court’s legitimacy. Put simply, people tend to view diverse institutions as more fair, accessible and open. The less the face of the judiciary reflects the diversity of the nation, the more difficult it is for the courts to maintain their legitimacy.”

The Washington Post noted in 2009 that Supreme Court Justice Sonia Sotomayor, speaking at the University of California at Berkley in 2001, years before she joined the nation’s highest court, recognized the importance of diversity. “Our gender and national origins may and will make a difference in our judging. Personal experiences affect the facts that judges choose to see….I wonder whether by ignoring our differences as women or men of color we do a disservice both to the law and society.”

Trust in the fairness of our democratic system is essential, particularly when the political atmosphere is as heated and conflictual as it is today. Filling a bench with judges, appointed for a lifetime, who are less representative than those they judge does little to build trust. If this trend continues through the end of the Trump presidency, the courts will seem foreign and distant from many Americans and will have little personal experience to help bridge that gap. Changing the makeup of the courts will not be easy, and rebuilding lost trust will take even longer.—Martin Levine