The Growth of Suburban Homelessness: “Invisible” in Montreal 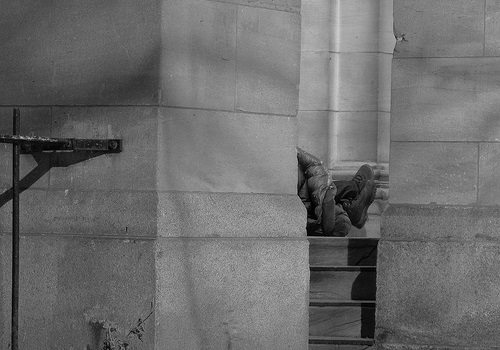 In suburban Montreal, an affluent area of “manicured lawns, in-ground swimming pools and two-car garages,” according to Sue Montgomery writing for the Gazette, the hidden homeless remain “invisible to all but the few community organizations struggling to meet the demand of those in need.”

According to Lucie Latulippe, in charge of two homeless shelters in Longueuil, “what is new is the size and diversity of homelessness.” Her two shelters house 700 people a year but turn away 1,200. The number of homeless who might be beyond those numbers is difficult to imagine. A study of homelessness from Vancouver in 2009 indicated that for every one known homeless person, there were another 3.5 hidden homeless.

Montgomery notes that a little-discussed aspect of the recent Quebec election campaign was a plank of the Parti Québécois calling for an action plan on homelessness, emphasizing “much-needed social housing.” This is striking for U.S. readers in two ways. One is that the U.S. press, to the extent that it shows any awareness of Quebec, is focused on the issue of linguistic nationalism, with no sense that Parti Québécois might have anything else in its platform. The other is the surprise that Canadian parties actually talk about housing and homelessness, a topic missing in political discourse in this country when it comes to Republicans and Democrats.

Unfortunately, Parti Québécois lost at the polls to the Liberal Party, which Latulippe and others say doesn’t seem to fully recognize the dimensions of the homelessness challenge. Émilie Rouleau from l’Écluse des Laurentides, a group that has street workers in a number of suburban Montreal communities, said that “there’s a lot of uncertainty and worry” about what the Liberals might do in their plans for an “austerity budget.”

However, speaking for the Liberals, Lucie Charlebois, the Liberal minister whose portfolio includes homelessness, said that the Liberal Party will develop an action plan on homelessness before the beginning of winter, noting that the Parti Québécois was not the only party with “heart and passion” on the issue.

A number of aspects of homelessness in suburban Montreal might have comparable dynamics here in the U.S.:

We suspect that homeless youth comprise an underreported dimension of homelessness in the U.S., too. Not just the children of homeless families, but young people who if not in shelters are crashing on friends’ couches or living in precariously insecure housing situations. What’s truly underreported about housing and homelessness in the U.S. are the positions of U.S. political parties on the issue; they can’t be reported because neither major political party says much of anything at all.–Rick Cohen