The Heroism of Polio Vaccine Workers in Pakistan 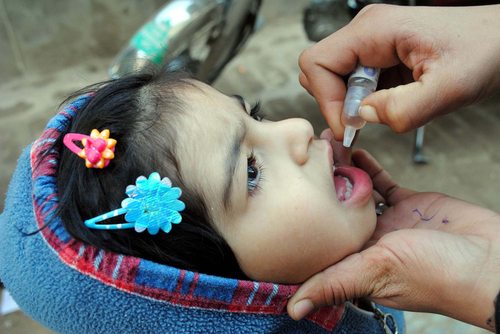 Just because time advances, it doesn’t mean conditions get better. It wasn’t all that long ago that polio had largely been eradicated from the world. But polio is back—in Nigeria, in Syria and, more significantly, in Pakistan. The story is complex, woven with political issues that seem to be unrelated to the reemergence of this horrible disease.

The epicenter for the reemergence of polio is Pakistan. The World Health Organization has identified 68 new cases of polio this year worldwide, and almost 80 percent are in Pakistan. Reportedly, this resurgence of polio is due in part to the opposition of the Pakistani Taliban to vaccinations in the areas of Pakistan where it dominates, such as North Waziristan. Forty of the 59 cases reported in the first four months of this year have been from North Waziristan.

The Taliban’s opposition has been in the form of killing members of government and NGO vaccine teams. However, Julie Hollar of Common Dreams cites New York Times coverage contending that whatever the opposition of the Taliban to vaccination, attacks on vaccine teams “escalated” with word that the CIA purportedly recruited Pakistani doctor Shakil Afridi to lead a “fake vaccination drive” to gain access to the residence of Al Qaeda founder and leader Osama bin Laden.

The notion that the Pakistani Taliban might consider polio vaccine workers spies probably predates the controversy surrounding Afridi, who is currently awaiting a new trial in Pakistan due to charges of treason. However, the vulnerability of aid workers has escalated in the country along with the rise of cases of polio. Reportedly, in addition to the idea of vaccine workers as spies, vaccine opponents have also suggested that the vaccines are un-Islamic and contain male and female infertility chemicals; in other words, the vaccines are meant to sterilize young Muslims and prevent the growth of the Muslim population. The New York Times reports that the Taliban also alleges that the vaccines were a Jewish conspiracy.

Pakistan, Syria, and Cameroon have been designated by the WHO as “polio-exporting countries,” meaning that citizens of those countries now have to show polio vaccination certificates before being allowed to travel abroad. Pakistan, however, is far in the lead of exporting polio and the government claims it has no money to buy polio vaccines. In contrast, the WHO declared Pakistan’s neighbor India and ten other nations in Southeast Asia polio-free for the first time in their histories. Syria, whose last case was in 1999, reported 35 cases of polio just last year, demonstrating in part that the reemergence of polio is related to the chaos of warfare that envelops some nations.

It has to take immense bravery on the parts of the polio vaccination teams that continue to do their work in trying to reach tribal areas of Pakistan to stop the spread of this disease. Stories such as the torture and death of Salma Farooqi, a polio vaccine worker from Peshawar, one of the nation’s “lady health workers” risking their lives every time they leave home, are truly compelling. Earlier this year, Human Rights Watch reported that 22 polio vaccination workers had been killed and 14 more wounded in Pakistan in the last two years.

The heroism of these workers, mostly indigenous Pakistanis rather than expatriates, should be remembered. When they fight the rise of polio in Pakistan, they are fighting for the health of everyone.—Rick Cohen