Board Demographics and Diversity

The Inclusive Nonprofit Boardroom: Leveraging the Transformative Potential of Diversity

Editors’ note: This article was first published in spring 2011 and is featured in NPQ‘s special winter 2012 edition: “Emerging Forms of Nonprofit Governance.”

Diversity abounds in our communities and organizations, and our understanding of what constitutes diversity continues to grow as patterns of difference shift, yet in many cases we, and our organizations, struggle to keep pace with societal trends. While diversity has many aspects, including individual differences along dimensions such as education or training, personality or style, this article focuses primarily on diversity based on dimensions such as culture, ethnicity, race, age, sexual orientation, and gender. We are looking at a particular context in which such diversity is a concern for many nonprofits, and that context is the boardroom.

The Urban Institute’s Francie Ostrower noted in a national survey of nonprofit governance in the United States that 86 percent of board members are white (non-Latino); a mere 7 percent are African American or black; and 3.5 percent are Latino. In a survey of nonprofit boards from across Canada, conducted in 2008, we found that the majority of board members were between thirty and sixty years old, and 44 percent were women. Almost 28 percent of the organizations indicated that there was at least one person with a disability on their board, while 22.4 percent of those surveyed had a board member who was openly lesbian, gay, or bisexual. Only 13 percent of board members were what in Canada are termed “visible minorities,” or persons of color.

While funders and others often seem to be advocating for more representative diversity on boards, this has not yet resulted in large shifts in board composition, with the exception of women. It is likely that you have heard the arguments in favor of increasing board diversity, including the claim that more diversity leads to superior financial performance, better strategic decision making, increased responsiveness to community and client stakeholders, and an enhanced ability to attract and retain top talent. But you may also have heard that researchers have found a correlation between increasing diversity among governing groups and greater conflict, as well as a deterioration in performance.

We too have struggled with these mixed messages. We wanted to deepen the conversation about diversity on boards through empirical research, in order to better understand the roots of this paradox and what is being done to respond to demands for both increased diversity and effectiveness.

We began by talking to eighteen board members from the voluntary sector in Canada who are viewed by their peers to be leaders in the effort to diversify boards. We were interested in looking at how they made sense of diversity, and what they saw as the best practices for enhancing it. While academics have tended to focus on diversity and the dynamics of “exclusion,” communities of practice are now talking about “inclusion.” Our informants described inclusion as an alternative to assimilation, in which all people are treated the same, or differentiation, where differences are celebrated and leveraged with the potential consequences of tokenism and exclusion. 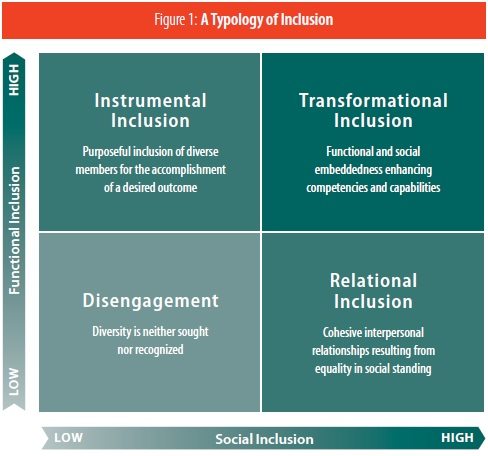 We came to define board-level inclusion as the degree to which members of diverse and traditionally marginalized communities are present on boards and meaningfully engaged in the governance of their organizations. We also noted that our informants implied that at times inclusion had potential transformational impacts for both traditionally marginalized individuals and for the board itself. Kristina A. Bourne similarly describes an inclusion breakthrough as “a powerful transformation of an organization’s culture to one in which every individual is valued as a vital component of the organization’s success and competitive advantage.” Bourne describes this concept as an alternative to seeing diversity as an end in itself or something to be managed or tolerated. But her claims, and those of our informants, have not yet been empirically examined. Reflecting on our interviews, it seemed that our informants were talking about two different types of inclusion—which we came to call “functional inclusion” and “social inclusion”—and about how the two can work together to create something transformational.

Functional inclusion emerged from our research as characterized by goal-driven and purposeful strategies for the increased inclusion of members of diverse or traditionally marginalized communities. Social inclusion, in contrast, is best characterized by the participation of members of diverse groups in the interpersonal dynamics and cultural fabric of the board, based on meaningful relational connections. Unlike the functional notions of inclusion, social inclusion also stresses the value derived from social standing and relational acceptance within the context of the board. Reflected in this view of relational acceptance is the need for members of traditionally marginalized communities to be authentically engaged as whole members of the board, avoiding marginalization and alienation.

We concluded that people were basing their comments on an implicit model, and we are suggesting that the combination of both types of inclusion could transform governance and create what we have come to call “transformational inclusion” (see figure 1).

As figure 1 proposes, the board that focuses exclusively on functional inclusion and on taking a “making the business case for diversity” approach will end up with what we are calling “instrumental inclusion.” Similarly, boards that focus exclusively on social inclusion end up with what we are calling “relational inclusion,” a model that tends to make people “feel” good. Boards that do both instrumental and relational inclusion, however, can generate transformational inclusion. To be really successful, boards of directors need to empower members using functional processes, and they must do so while integrating (rather than assimilating) diverse members using social and relational means as well. For these reasons, we hypothesized that governing groups that are more diverse and implement functionally and socially inclusive practices will be more effective and have higher cohesion and greater commitment than their less diverse counterparts.

We decided that this hypothesis deserved to be tested, and developed a questionnaire that surveyed respondents from 234 boards of directors operating in Canada’s nonprofit sector. We measured board diversity by counting the number of ethnocultural and visibly different groups represented on the boards. Our analysis of the impact of increased diversity on boards supports previous research documenting the challenges of diversity. We found that higher levels of diversity were correlated with perceptions on the part of our respondents of lower levels of board effectiveness.