The Jenner Tipping Point in the Transgender Health Disparities Conversation 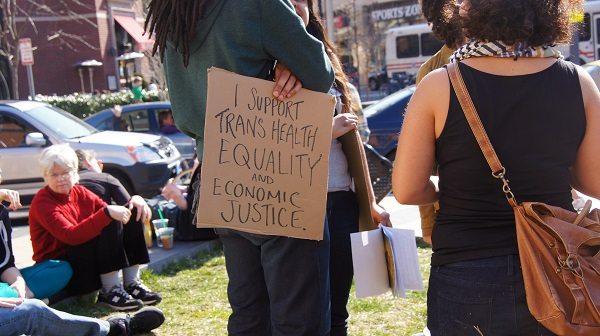 When the June issue of Vanity Fair magazine introduced the world to Caitlin Jenner, posing in pinup style on its cover page, Google reported over 10 million searches within a few days. Despite the sensationalism surrounding the news, Jenner’s bold move to talk about the private struggles she has faced as a transgender person has elevated the national dialogue about transgender equality in a way that may represent a tipping point in transgender consciousness in this country, particularly as it relates to disparities in healthcare delivery.

NPQ has been following developments in addressing that inequality. Many transgender individuals describe their reluctance to seek medical care because of their negative encounters with physicians who may be biased, lack sensitivity or knowledge, or who lack confidence in talking about their specific needs. The subsequent dangers of increased medical morbidity and mortality are real. Vanderbilt’s School of Medicine cites some examples. Trans men who still have a uterus, ovaries, or breasts are at risk for cancer in these organs. Trans women are at risk for prostate cancer, though this risk is low. Transgender persons have higher rates of depression and anxiety compared to others and are often at higher risk for heart disease because of hormone use, smoking, and obesity.

Medical colleges around the country are developing programs that train physicians to provide best practices in treating the transgender population. The Vanity Fair publication coincides with an event last Thursday at the University of Louisville School of Medicine bringing together physicians and other healthcare providers to talk about transgender issues, discuss best practices in healthcare, and network with transgender community leaders to identify gaps and steps to improve care.

Beginning in August, the School of Medicine will be the site for a national pilot program and will implement the curriculum developed by the Association of American Medical Colleges to train future doctors on the unique concerns of people who are transgender, gay, lesbian, bisexual, gender non-conforming, or born with differences of sex development.

“We’re being looked at to see what works and what doesn’t and to be a model for the nation,” says Faye Jones, an assistant vice president in the university’s Office of Inclusion. “This is a topic that has been taboo for a long time. Physicians want to provide the best care for these patients, but they may not be aware of issues and how to address someone in a culturally responsive manner.”

Training physicians is part of a larger strategy. “Ultimately, it is our goal to have an identified medical ‘home’ that provides all aspects of care for transgender patients in Louisville, as has been developed in other major clinical centers in the United States,” said Amy Holthouser, MD, associate dean for medical education at the U of L School of Medicine. “This will reinforce the core stance that a competent physician is skilled in the care of all patients within their community and can approach each patient with sensitivity, compassion and the knowledge necessary to promote health and wellness.”

While the AAMC drives systemic change in the way physicians approach their transgender patients, other groups are addressing healthcare delivery disparities in a broader context. In May, New York State attorney general Eric Schneiderman announced a new public-private partnership to improve healthcare services for transgender patients in hospitals throughout the state. A coalition including the New York Attorney General’s Office, Greater New York Hospital Association, Mt. Sinai Health Systems, and Lambda Legal will provide information and training to hospitals about both legal requirements and best practices for addressing the health needs of transgender people.

What may be the most complex issue in the discussion is how the insurance industry responds to these shifts. The University of California’s Center for Excellence for Transgender Health, whose mission is to increase access to comprehensive healthcare services for trans and gender-variant communities, describes discriminatory practices by insurance companies.

The center reports that, “Health insurance policies often overtly exclude treatments for transgender or transsexual people’s health care needs, even when these needs are not related to a gender transition.” It goes on to say that, “Physicians or their support staff members may need to interact with insurance claims processors on behalf of their transgender or transsexual patients to insist that medically necessary treatments are covered. In such interactions it will be necessary to support the patient’s preferred gender in relationship to the insurance company in the best interests of the patient’s health.”

It seems that this may be a competency well worth including in any physician-training program.—G. Meredith Betz