The Language of Hate: Westboro Forges On after Death of Founder 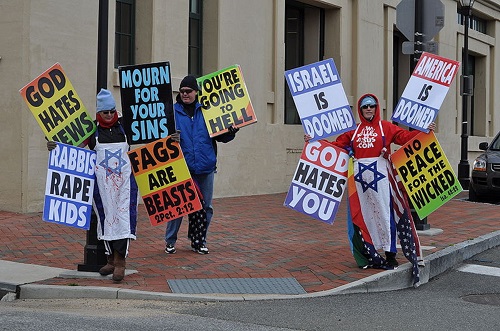 Despite the death of its leader, the Rev. Fred Phelps, the Westboro Baptist Church continues to spread word of God’s hatred of almost all of us. On a leaflet posted here, the church declares that it will protest at a Colorado State University graduation ceremony on May 17th.

“Students graduating from universities in doomed-america [sic] this year are a unique generation—unique in their filthy manner of life; unique in the lies that pervade their every thought; unique in their aggressive enabling and embracing of fags and same sex marriage; unique in their utter ignorance of the Bible and anything that matters in this life. They’ve been immersed in deadly lies from the womb, and truly would have been better off killed at birth.”

While we might on most days dismiss this stuff as so much pathetic drivel, in the wake of the shootings in Kansas it is hard to think of any of this kind of language as entirely divorced from action. As we wrote a few days ago, Frazier Glenn Miller was “a raging anti-Semite who has posted more than 12,000 times on Vanguard News Network (VNN), whose…founder Alex Linder has openly advocated exterminating Jews since December 2009.”—Ruth McCambridge