The Multiple Roots of the Excruciatingly Slow Aid Response in Nepal 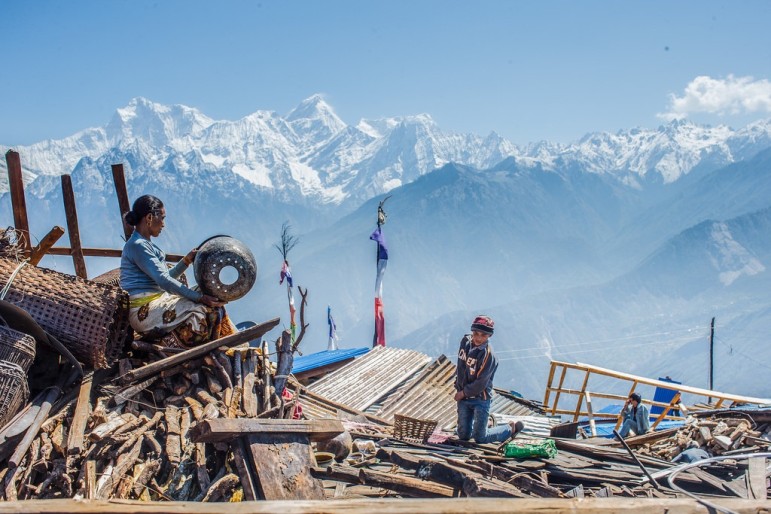 If you follow the ongoing programming of 21st-century disasters, Nepal’s April earthquake was a rerun of NGOs being taken to task for failing in their relief efforts. In the months since the devastating quake, journalists have played their part in a now very familiar teleplay: Disaster hits developing country; Western aid agencies raise millions in donations; aid workers rush to help but end up overwhelming a broken system; the media complain that relief organizations are wasting donors’ money.

Hurricane Katrina, the 2006 tsunami, and Haiti’s 2010 earthquake all had their own elements of mismanagement and ineffectiveness, and now the lens is focused on Nepal with little changed. While the Thomson Reuters Foundation, the Disaster Accountability Project, and Al Jazeera portray ineptitude, a lack of coordination, or even malfeasance on the part of international NGOs, their coverage tends to downplay on-the-ground viewpoints and the historical and political backdrop that may contribute to these outcomes.

First of all, the Thomson Reuters Foundation article states that “affected communities have denounced the response to the twin quakes in April and May as too slow, with some claiming to have seen scant evidence of nearly $475 million raised through U.N. appeals.” But other reports indicate that communities have in fact been denouncing the slow response of the Nepalese government itself.

According to this article from the Kathmandu Post, Nepal has three donation-based aid relief mechanisms: the prime minister’s relief fund, the UN system through the Office for the Coordination of Humanitarian Affairs, and donors through the U.S. and UK who work through their own NGOs:

Although INGOs have systems in place to handle large amounts of money and implement the strategic intentions of donors, they are not very cost effective. Similarly, the UN system is very costly and its internal oversight mechanisms are very weak. The UN has failed to arrest growth in employment, salaries, and benefits. Personnel costs account for over 70 percent of UN spending, according to the UN’s Advisory Committee on Administrative and Budgetary Questions.

In this context, U.S.- and UK-based international organizations are one piece of the relief puzzle, but are not the only actors with the potential for cost ineffectiveness.

To give some historical background to the difficulty of providing aid, the pre-earthquake Nepalese government was in the grips of a long constitutional stalemate after a civil war with Maoist rebels looking to end 240 years of monarchy. Those political dynamics don’t just crumble away under the rubble of an earthquake, but instead inform how citizens gain access to relief, particularly in light of poverty, a caste system, and a society acutely polarized about how it should be governed.

As the Kathmandu Post article also states, “Although factors like geography play a significant role, poverty in countries like Nepal is explained by the presence of institutions controlled by a small number of people who extract incomes, wealth, and power from a large number of people who remain poor and powerless.” Along with the research literature on this topic, we can see from the get-go how political strife is not conducive to an effective response from anyone.

Another problem with reporting in this area is the focus on overhead as a sole indicator of effectiveness. NPQ has outlined extensively how the obsession with this metric is neither fair nor viable. With natural disasters, whether relief organizations meet actual needs is a more germane question. For example, disasters have made women and children in Nepal particularly vulnerable to sex trafficking and abuse. Aid in this case can take the form of child-friendly spaces, which are more long-term initiatives. How NGOs invest in non-disaster-specific programs is largely missing from the Thomson Reuters Foundation survey, as are benchmarks about how soon money should be spent in order for the work to be deemed effective.

Sitting on money meant to help people is obviously not ideal, but neither is sending supplies, like beans and soda, that no one wants. Overhauling the international relief machine is still unlikely to produce a bump-free relief process from hardship to happy-land. That ideal is impossible in any country, simply because too many human elements are at play when disaster strikes. While it is true that specific NGOs suffer from any number of symptoms, from mismanagement to a lack of transparency, jumping to the conclusion that these problems are the sole source of the world’s relief woes negates the complex roles of the many actors in these situations.

We need to call out NGOs for failing to take local needs into account to avoid a waste of resources. But calls for oversight that stress overhead instead of outcomes is like saying no money should go to disaster-stricken countries until everyone gets their act together—or until nonprofits, like fairy godmothers, figure out a way to produce aid out of thin air with no overhead or infrastructure of their own and somehow magically circumvent long-standing political systems to help those in need.—Amy Butcher