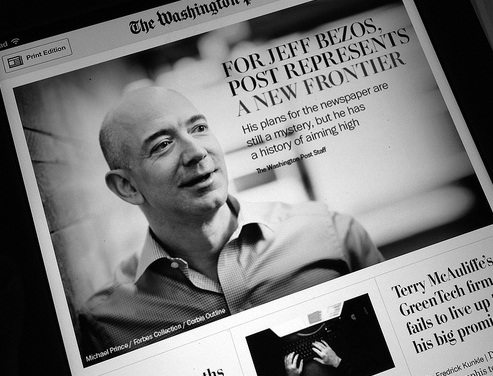 Becky O’Malley of the Berkeley Daily Planet has written an open letter to Jeff Bezos on the occasion of his purchase of the Washington Post. But she prefaces it with a joke:

Mr. Bones: “Do you know how you can make a small fortune in the newspaper business?”

Eager Buyer: “No, Mr. Bones, how can I make a small fortune in the newspaper business?”

Mr. Bones: “Why, start with a large fortune, of course!”

O’Malley confesses that she was also a part of buying a paper, the Berkeley Daily Planet—albeit for only $15,000, not the $270 million dollars paid by Bezos for the WaPo. However, she says, trying to establish common ground, both were losing money! She said they naively believed in their own business acumen and that that break-even was possible, but over the ensuing eight years, they lost “a considerable percentage of what we’d made in our previous high-tech enterprise.”

So, she says, forget that monetizing thing. Distribution will not save you as a business, nor will ads; in fact, all that will distinguish you if you are lucky is the quality of information produced, and that takes money. Opinions are fine, but they run their course without the hard stuff.

Then, O’Malley winds it all up in a neat little distressing package.

“My conclusion, Jeff, which I’m happy to pass along to you pro bono with no consulting fee, is that running a newspaper isn’t a business any more, but a philanthropic enterprise. Your role model should be Andrew Carnegie, who made his fortune in the steel industry and then put his profits into the wildly successful project of setting up free public libraries across the country and founded organizations devoted to world peace, racial justice and other worthwhile causes.

As long as you’ve given up the idea of making money from owning the Washington Post, you’ve embarked on a worthy task. You’ve made your mark in business, and now you can secure your place in history if you do it sensitively.

And while you’re at it, by the way, you should enjoy it too. Now that you’re really rich, you should be able to have a bit of fun for a while. At least, I’m here to tell you, it won’t be boring.”