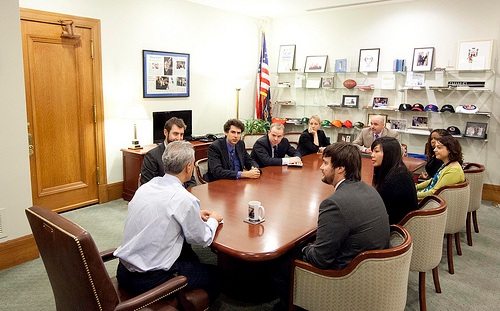 Calling itself “the Peace Corps for Geeks,” the San Francisco–based nonprofit Code for America (CFA) is on a mission to help city government work better through technology. Since it was founded four years ago, the organization has set up a fellowship program and is sending teams of developers, activists, and policy planners to cities requesting their help.

As CFA proclaims on its website: “Code for America is a … new kind of organization. Our team is made up of web geeks, city experts, and technology industry leaders. We are building a network of civic leaders and organizations who believe there is a better way of doing things and want to make a difference.”

So far, the organization has helped several cities get the code their needed for civic projects. In New Orleans, CFA’s team partnered with partnered with New Orleans City Hall and the local Redevelopment Authority to develop BlightStatus, a tool that lets people check on blighted properties in NOLA neighborhoods via the web. The Honolulu Answers project allows people to search city websites for information they desire. In Boston, Code for America is responsible for Where’s My School Bus, an app that lets parents check on the real-time status of school buses; and for Adopt-a-Hydrant, a web app that recruits volunteers to shovel around fire hydrants during snow storms.

According to ArsTechnica, the coders in Oakland will spend the year developing a “public records request portal.” It’s meant to make it easier for people to request information from the city’s vast but unorganized files, and to let others track the progress of the delivery of the information. In partnering with CFA, Oakland officials acknowledge that the city needs some help in figuring out how to make its data useful and informative to citizens. In its CFA application, Oakland wrote: “We currently have a system in place that is clunky and difficult to use. By thinking through a new system, we can enhance our Open Government initiatives and become a more transparent city.”

The Oakland project, like others across the country, raises issues and suggests opportunities and challenges. While many people believe technology can solve some tough urban problems, each CFA worker is paid $60,000 annually in salary, benefits, and travel. That’s money that could be used, for example, for putting police officers on the street. It will be up to the cities, and ultimately their residents, to decide whether the solutions developed by CFA measure up to their promise. –Mary Jo Draper