Philanthropically Speaking, Who are the Donors to Organizing for Action? 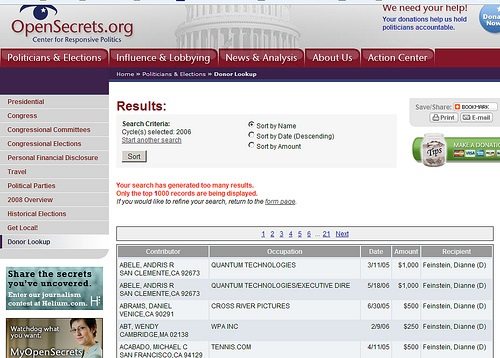 Initially, Organizing for Action wasn’t totally on board with the concept of revealing the names and amounts of the major donors to this Obama-linked political nonprofit, but it is doing so—at least by releasing donors’ names and hometowns. Through its “Open Secrets” reporting on money in politics, the Center for Responsive Politics has done the digging to figure out who these big donors actually are. Fourteen donors have given $100,000 or more to Organizing for Action in the 2014 campaign cycle to date. They are well known donors to Democratic Party campaigns, so OFA has announced a “fundraising timeout” to start in two weeks so that these donors can shift their attention from the OFA, which is not legally permitted to coordinate its activity with political campaigns, to specific campaign-oriented funds tied to the 2014 midterm elections.

OFA’s voluntary disclosures reveal donors from hedge funds, real estate, and philanthropy, though that shouldn’t be surprising: Big donors are people with big money. Among the more notable OFA donors with philanthropic interests are these:

Don’t take this as an “outing” of liberal donors. Just as we often talk about the philanthropic identity of conservative political donors, this list simply demonstrates that moneyed people in the political arena frequently have charitable and philanthropic identities. In some instances, the type of philanthropic grantmaking priorities these people emphasize provide some extra detail to their political thinking.—Rick Cohen