The Real Value of That Billion $ Gift to the Met? 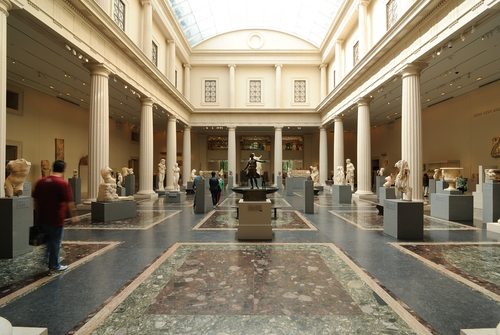 It’s the talk of the town.

On the evening of Tuesday, April 9, 2013, the Metropolitan Museum of Art in New York City announced a gift made to it by Leonard Lauder (Chairman Emeritus of the Estée Lauder cosmetics empire) comprising 78 important Cubist paintings, including 33 Picassos, 17 Braques, 14 pieces by Fernand Léger and 14 pieces by Juan Gris. Apparently, there are no strings attached. The Met had not been previously known for its modern collection, so this gift positions the museum quite differently.

While the museum has not provided a value for the gift, others have estimated it at at least $1 billion. (Lauder’s estimated worth, according to Forbes, is $8.1 billion.) But Blake Gopnick suggests that this might be either an underestimate or a cause for worry regarding the attractiveness of the collection. “If these Cubist pictures are really only worth a billion dollars, as various sources (but not the Met) have been claiming, that averages out to a measly $13 million each—about the amount you might pay for a middling contemporary painting by a collectors’ darling….With truly great, historic works now going for as much as a quarter-billion dollars, Lauder’s Picassos and Braques are either worth way, way more than a billion, or they’re way less good than people are saying.”

Gopnick goes on to say that it’s possible that the pieces are both of high quality and undervalued, because the art market is too baffled by modern art to properly evaluate its worth. “Cubist works have always been too challenging for the market to price them correctly. They’re small and dark and confusing, so they look lousy over a sofa.” He suggests that the gift might better have been made to the Museum of Modern Art, where they’d be in good company with other challenging pieces. (Interestingly, Ronald Lauder, Leonard’s much poorer older brother, is the Honorary Chairman at MoMA. He’s worth a measly $3.6 Billion, and is ranked the 123rd richest man in the U.S., in comparison with Leonard’s ranking of 46th.) You can look here at a highlight reel put together by The Atlantic to see some of what Gopnick observes.