The Rights of Domestic Workers: A Worldwide Movement 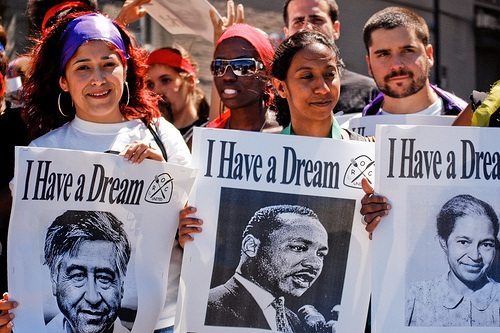 In December of 2011, President Obama declared his commitment to revise the Fair Labor Standards Act so as to remove the exemption that has left home health aides unprotected in terms of minimum wage and overtime requirements but the changes are yet to be formally approved. While organizing on behalf of domestic workers more broadly has been going on for decades, this particular exemption has existed for almost forty years despite the fact that the United States is one of the signers of a United Nations (U.N.) International Labor Organization (ILO) treaty promulgated in June of 2011 aimed at ensuring the rights of domestic workers. The U.S. is not moving quickly, but let’s look at some recent momentum on this issue on the international level.

A new U.N. ILO study published on January 9 found that there were at least 52.6 million domestic workers worldwide as of 2010 (up from an estimated 33.2 million in 1995) and about 30 percent of these workers are completely excluded from protection under employment legislation, while only a small portion (about 10 percent) enjoys the same labor rights that other workers do. By the way, these numbers do not count the estimated 7.3 million children under age 15 doing domestic work. This is clearly a women’s issue since domestic workers worldwide are overwhelmingly (83 percent) women and domestic work is estimated to be approximately 7.5 percent of women’s wage employment globally.

In the Philippines, Cecilia Flores-Oebanda, an advocate with the Visayan Forum Foundation, which fights modern day slavery, told TrustLaw, “You can trace [domestic work] to our history, which is itself rooted in slavery…No one has really challenged it…so there was a lot of resistance initially.” But last month, after 18 years of advocacy and a lengthy legislative process, Philippines President Benigno Aquino signed legislation protecting the rights of domestic workers.

The new law, called Batas Kasambahay, requires employers and domestic workers to make a contract of employment and it regulates the minimum wage of domestic workers; it also requires that they are registered in social benefit systems by their employers. It disallows debt bondage and working conditions that prey on domestic workers’ vulnerability.

If the growth trend ILO report continues, the ranks of domestic workers will continue to grow in the next few years. Clearly, policy frameworks need to protect their rights. For more on this issue, see this Aspen Institute discussion titled “Home Economics.”

It is worth mentioning that some nonprofit organizations have stood against the effort to pay these workers minimum wage and overtime, asserting that it would make home care too pricy for some. The resolution of this quandary, however, should clearly not be at the expense of an entire class of workers. –Ruth McCambridge