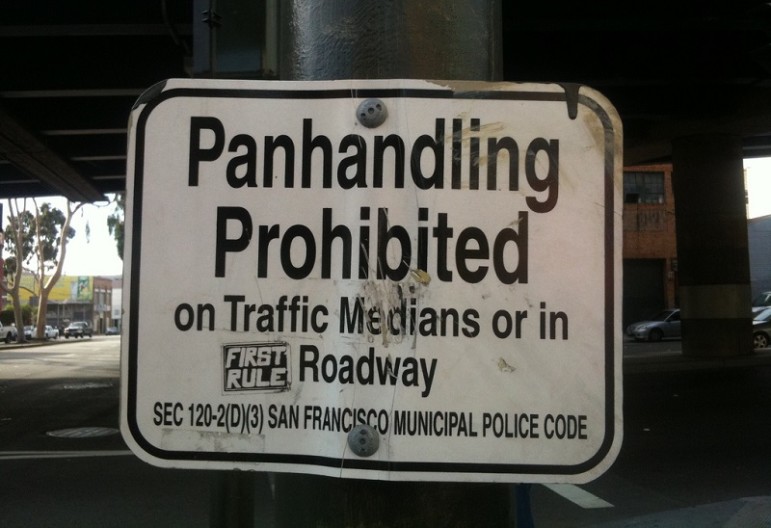 As cities increasingly adopt anti-panhandling ordinances, they find themselves facing legal challenges. Teresa Wiltz reports for Stateline that that the number of cities with outright bans has increased 25 percent between 2011 and 2014, while those with restrictions on panhandling in designated public places (such as near schools) rose 20 percent. Examples include Tennessee, which has banned “aggressive” panhandling; Utah, which has outlawed panhandling in traffic; and Atlanta, which has passed a law preventing panhandling throughout much of the downtown area.

Opponents argue that these laws violate First Amendment free speech rights. Wiltz says that three federal judges have struck down or otherwise turned back anti-panhandling ordinances if those ordinances were “content-based” rather than “content-neutral” speech restrictions. One example is the overturning of the “aggressive panhandling” ordinance of Worcester, Massachusetts.

Homeless advocates claim these ordinances criminalize homelessness and poverty. Supporters of the ordinances, however, claim they are simply trying to reduce the nuisance created by panhandlers, not to criminalize homelessness itself. Moreover, the panhandlers are not always homeless. As Susie Sinclair-Smith of the Montgomery County Coalition for the Homeless points out, about half of the panhandlers are simply very poor.

There is some indication that the rise in anti-panhandling ordinances is related in some ways to the economic revivals of downtowns, with residents of luxury condominiums and patrons of upscale restaurants and bars unhappy with the presence of homeless panhandlers. Downtown business and real estate interests aren’t particularly happy with the market impact of visible poor people.

“Cities are being pressured to ‘do something,’” says Maria Foscarinis of the National Law Center on Homelessness and Poverty. “The idea is that visible poverty is bad for tourism and bad for business. A lot of cities have chosen a quick fix response, passing a law making it a crime to be poor.”

Notwithstanding the legal challenges to many anti-panhandling ordinances, communities are still passing new laws. Just recently, Nashua, New Hampshire, narrowly adopted a law that calls for “prohibit(ing) citizens from distributing, exchanging or receiving any object from an operator of a motor vehicle while the car is on the travel portion of a public roadway,” as summarized by Kimberly Houghton of the Union Leader. In the summer, the city of Charleston, South Carolina, adopted an ostensibly content-neutral ordinance “that would prohibit anyone—including panhandlers, people collecting money for charities, handing out religious fliers or selling newspapers—from passing items to or from the occupant of a vehicle on a roadway in a traffic lane.” Other cities whose ordinances have been deemed not constitutionally solid, like Worcester’s aim to stop panhandling near ATMs and bus stops, plan to fight to overturn the court rulings or adjust their ordinances to make them legally enforceable.—Rick Cohen