The State of the Union, Six Months Later 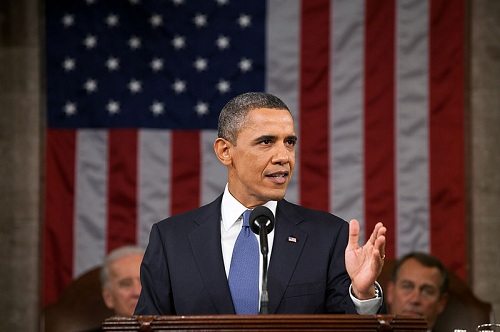 Writing for The Hill, Justin Sink says that President Obama’s progressive second-term agenda, as outlined in his State of the Union address, “appear[s] to be gathering dust.” Sink finds “little movement” on many issues, “best epitomized by the battle over gun control.” He adds other elements of the President’s agenda that have fallen short of achieving public traction, much less legislative victories, such as raising the minimum wage to $9.00 or more an hour from the current level of $7.25, a proposal that hasn’t even had a hearing in the House of Representatives; the president’s call for the repeal of the sequester, an issue that seems to be making little headway; immigration reform, which, after much ballyhoo, he has gotten Republicans to say that they’ll address, but only in a piecemeal fashion; and even voting rights, which have not only not improved, but have had their progress reversed, what with the Supreme Court’s decision to strike a key part of the Voting Rights Act. At least the Supreme Court did away with the Defense of Marriage Act.

What about the nonprofit-specific content of the State of the Union? As we pointed out at the time, there wasn’t much that we could spot. We mentioned as nonprofit issues the same ones discussed above—minimum wage, sequestration cuts, immigration reform, and voting rights. However, the president skipped discussion of expanding AmeriCorps, or taking on the Citizens United decision, or any element of campaign finance reform, or defending and increasing U.S. foreign aid.

Hindsight is 20/20, so it is a little unfair to fault the president on issues that he didn’t address or issues that, in retrospect, didn’t turn out to be quite as he presented them. On the other hand, he is the president of the United States and took as part of the job the challenge of accountability that comes with it. So, in addition to the issues that both Sink and NPQ identified, a review of the speech six months later reveals other items that either suggest limited policy progress or evolution in directions that the president’s speech didn’t imply:

The President’s nonprofit SOTU agenda, as difficult as it was to discern earlier this year, nonetheless needs a mobilized nonprofit sector to push, prod, and call out the White House and the feckless, do-nothing Congress. Otherwise, Justin Sink can write the same article six months from now and then six months after that about a progressive agenda gathering dust.—Rick Cohen