The Urban Power of Rails to Trails and ‘What Ties Me to You?’ 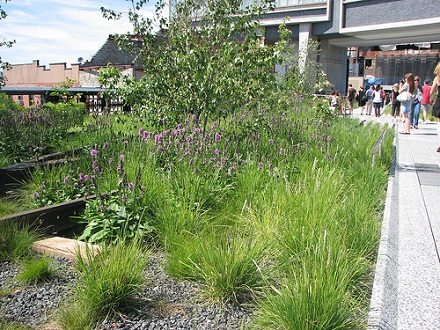 The new Eastside Trail in Atlanta is a 2.25-mile-long paved walking and cycling trail with breathtaking views and it is one section of the BeltLine. The Eastside Trail is part of a $2.8 billion plan to transform a 22-mile railroad corridor that encircles Atlanta into a network of trails, parks, affordable homes and streetcar lines and it is just one example of transformational “rails-to-trails “projects going on around the country.

On New York City’s West Side, the famed High Line is another example where a 1.45-mile-long above-ground park (where the elevated train used to run) now attracts 2 million visitors a year. And in Chicago the 3 mile long Bloomingdale Trail has replaced the elevated train there. The projects are designed to be beautiful and make city neighborhoods more livable but also to spur economic development. In New York, the High Line is credited with sparking $2 billion in new construction around the intallation.

According to this article, nationally more than 1,600 abandoned or unused rail corridors have been transformed into 1,900 miles of trails.

Atlanta may be especially well suited for such a project since it was originally founded as a railroad crossroads before the Civil War, but it is a city known for its dependence of the car. Bike paths are not prioritized in the new development but a light rail system is planned.

More than $1.3 million has been invested in public art on the Beltline in Atlanta. Some of the projects have been permanent and some are temporary. Misao Cates’ project seems to beautifully state the potential of this effort in that it takes up the theme of “what ties me to you?” The project asks people to write short messages with a black marker on white ribbons based on that theme, then the ribbons are tied across bamboo poles. By mid-November, there were more than 1,000 messages attached.

The display will come down in December and Cates said she plans to do a final count of the ribbons and then “burn them to release the inscriptions and messages to the wind.”—Ruth McCambridge