The Wealth Gap as Reflected in Gifts to Universities: Is There a Crowd-Out Effect? 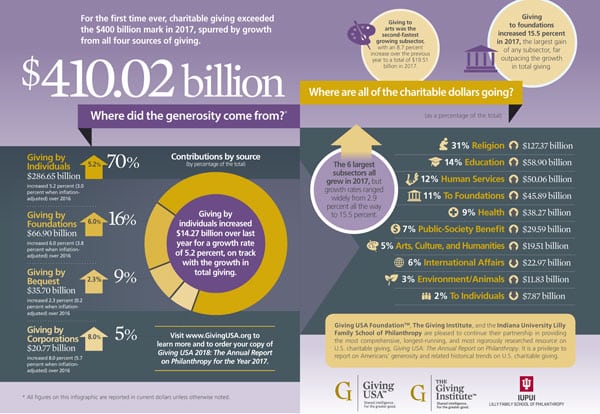 According to the Council for Aid to Education, a dozen high-dollar donors accounted for almost one-third of the dollars given to colleges in the last year. At the same time, the percentage of alumni who give has plummeted from 19 percent in 1990 to 7.4 percent last year. What is going on and is it healthy for an institution when its base of supporters grows ever smaller?

This pattern, as we wrote in our piece about the findings of Giving USA, reflects the larger wealth gap in the economy and the increase in very-high-end gifts. As we said in that piece, in each of the last three years, Giving USA has raised the floor on mega-gifts that threw off their report’s algorithms. Three years ago, mega-gifts were defined as those over $100 million; in 2017, they were counted as “mega” only if they hit $300 million or above.

Within charity research, there has been much written on the “crowding out” and “crowding in” effects of government funding. Garth Heutel writes:

Public goods are often provided by both governments and individuals. The interaction of these two sources may affect the overall level of funding. In response to an increase in government spending on a public good or charity, individuals may reduce their contributions. The same effect can occur in the opposite direction. If a government sees that private donations to a charity have risen, then it may reduce its support of that charity. Additionally, some funding may crowd in other funding if it signals charity quality.

The wealth divide in the larger economy, of course, appears to have also created a divide in institutions. Less than one percent of the nation’s colleges brought in around 30 percent of the $43.7 billion given to higher education. Harvard and Stanford Universities set records last year by bringing in $1.28 and $1.13 billion respectively. It’s no wonder that more moderately well-off alumni would not see the need to give in the context of individual donations in the hundreds of millions.

Institutions that Raised the Most in 2017

(Data from the Council for Aid to Education.)

Not only does this kind of money create the kind of skepticism in Congress that leads to taxes on endowments, but in light of such massive gifts, the money of regular folk just doesn’t seem so important. Bloomberg cites one such case:

Jonathan Hoffman, Harvard class of 1969 and a lawyer in Portland, Ore., says he gave “substantial sums” a decade ago but cut back to $100 a year—and now, nothing—because he didn’t think an institution that pays its endowment managers millions of dollars a year needed his cash. He gives to Room to Read and Habitat for Humanity instead. “There are so many organizations in need,” he says.

Just a thought, but maybe worth some investigation.—Ruth McCambridge