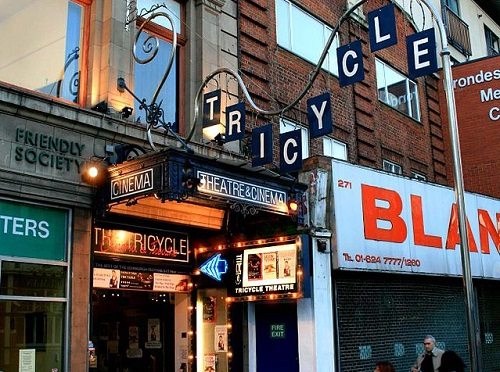 The Tricycle Theater in London has hosted the Jewish Film Festival for the last eight years, but it has pulled out this year because the festival has financial support from the Israeli embassy. The films in the event generally reflect a broad view of Jewish life and views, but Jonathan Levy, speaking for the Tricycle’s board, writes that the theater could not be associated with “any activity directly funded or supported by any party to the conflict,” given the “unforeseen and unhappy escalation that has occurred over the past three weeks, including a terrible loss of life.”

Reportedly, Indhu Rubasingham, the Tricycle’s artistic director, offered during negotiations with UK Jewish Film, which puts on the festival, to help make up any shortfall in funding that might arise from turning down money from the Israeli government. That offer was dismissed out of hand as a matter of principle and the festival was subsequently withdrawn from the theater.

Rubasingham echoed Levy’s statement. “The festival receives funding from the Israeli embassy, and given the current conflict in Israel and Gaza, we feel it is inappropriate to accept financial support from any government agency involved.” On the other side, someone familiar with the negotiations said, “It’s not about the money. The fact that the Tricycle Theater think that it is in some way plays into old-fashioned stereotypes.”

The Tricycle has been known for representing and connecting to one of the most culturally diverse areas in London. “The…irony about all this is that play was about unheard voices,” Rubasingham said. “Israel is always talked about in terms of conflict, but that play talked about its openness, tolerance and engagement.”

“It is entirely understandable that they felt obliged to insist that no government agency should sponsor the festival,” Sir Nicholas Hytner, the director of the National Theatre, said in a statement. “It greatly saddens me that the UKJFF have unwisely politicized a celebration of Jewish culture and I deplore any misrepresentation of the Tricycle’s position. I support Indhu Rubasingham and the Tricycle without reservation.”

The decision has resulted in charges of anti-Semitism against the theater. A boycott is being cooked up and a protest is planned for today.—Ruth McCambridge