Thieves Knew Not What they Did: Return Booty to Charity with Apology 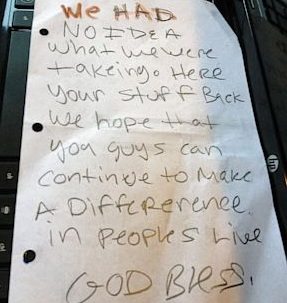 Here’s an “all’s well that ends well” story, via ABC News, from San Bernardino, California, about 50 miles due east of Los Angeles. A local nonprofit that helps sexual assault victims was victimized by a break-in on August 2nd, but the thieves ended up returning the stuff when they learned they had stolen it from a charity.

“I got chills when I saw the note,” San Bernardino Sexual Assault Services Executive Director Candy Stallings told ABCNews.com. “I was teary eyed, and I had so many mixed emotions. A police officer I was with at the time said they had never seen anything like this in the 20 years they were on the force. We were completely shocked.”

Stallings said she received a phone call from her alarm company at 10:30 p.m. on August 2nd, informing her that the building’s alarm had gone off. She headed down to the center, where she saw a San Bernardino police helicopter flying overhead. Police and a canine unit were investigating the break-in. Inside, she said, the building’s telephone wires had been cut, its Internet connection was down, and six computer towers, a laptop, speakers for the laptop, children’s storybooks and 100 bags of small candy had been stolen.

But she heard again from police about two hours later. They told her that there was more suspicious activity. “The officer monitoring the building after the robbery noticed a shopping cart in front of the door,” she added. It turned out someone had returned the stolen items along with a note inside the laptop apologizing for the theft.

“When I looked inside the cart I thought, ‘These are our items that they had taken before. This doesn’t make any sense. Why would they bring it back?’”

Then, an officer found the note inside the laptop as he was taking fingerprints; it read: “We had no idea what we were taking. Here is your stuff back. We hope that you guys can continue to make a difference in people’s lives. God Bless.”

“I started thinking that even though I was upset with the damage they caused inside, I just thought sometimes people make bad choices and it was compassion that brought those items back to us,” Stallings said.

No suspects have been apprehended and the investigation is still ongoing. Police said that, although the items were returned, the thieves will be held accountable for their crime.

The San Bernardino Sexual Assault Services building is not clearly marked because the center wants people who enter to feel comfortable walking in without feeling like they are being judged.

“Our building does not have our full name on it, so it is likely the thieves wouldn’t know what we do here,” Stallings said. “But when they found out, they obviously changed their minds and decided to return the stolen items. These individuals felt compelled to give back for some reason. And, of course, I don’t know officially, but that’s my gut feeling that they were close to the cause.”

One has to wonder if they would have done the same for any charity, but we will never know.—Larry Kaplan