Thousands across the Continent Take the Plunge—Yikes!—for Charity 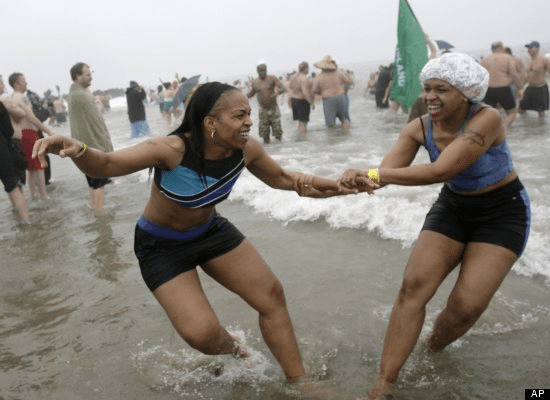 January 2, 2012; Source: Huffington Post | There are some charity events that confound this heat-seeking author—like the frigid polar bear swims that take place every New Year, purportedly for charity, but I figure there are other good reasons to take part because, after all, you could just grab your checkbook and write a check to the charity in question. These ladies in Coney Island, above, for instance, look like they are having fun.

And in Toronto, Joey Riegling, 40, who dressed up as a Mexican wrestler, reveals the complexities of his motivations for participating—“(I go) for charity and just for the pain and torture of the whole thing,” he said. “It is excruciating. It feels like you got lit on fire, almost, ‘cause it’s so cold. It’s bad.”

In Tsawwassen, Vancouver 1500 people came out on a balmy five-degree day. In South Boston this year, where the L Street Brownies have been sponsoring the rite, accompanied by bagpipes, for 109 years, the event attracted fewer participants than usual this year because the tide refused to cooperate. The plunge was taken at 8:00 am by somewhere between 600 and 700 hardy souls, while others not informed of the earlier than usual start time and perhaps still suffering from the evening previous, staggered up bleary eyed around 9:00 or 10:00.

Boston.com reported that Jim Bove of Canton ruminated, “Some consider the dip into wintry water a spiritual rite…I do it because it cleanses my soul.” He added, “Real men go under. You have to go under, or it doesn’t count.”