Threats to Sanctuary Cities Take Shape: “Your Money or Your Community”

Yesterday, Attorney General Jeff Sessions announced the U.S. Justice Department would follow through on an executive order from January that demands federal funds be withheld from sanctuary cities and states. He claimed that the end goal was to ensure security for the American people. However, those federal funds will come from programs that protect and support American people, and studies show that ICE cooperation may not be the crime deterrent the administration is touting.

The executive order states, “the Attorney General and the Secretary, in their discretion and to the extent consistent with law, shall ensure that jurisdictions that willfully refuse to comply with 8 U.S.C. 1373 (sanctuary jurisdictions) are not eligible to receive Federal grants, except as deemed necessary for law enforcement purposes by the Attorney General or the Secretary.”

There is no official definition of “sanctuary city,” but it is generally understood to mean one that does not comply with ICE orders to extend detainment of suspected illegal immigrants detained by local law enforcement on suspicion of other offenses while ICE verifies their status, share information about immigration status, or devote state and municipal resources to ICE enforcement. New York, Chicago, Austin, Los Angeles, Seattle, Detroit, and other major metro areas have declared themselves sanctuaries, and are at risk; Maryland is considering a statewide sanctuary bill that the governor has promised to veto.

Others cities, like Boston and Denver, have not officially designated themselves “sanctuaries” but have promised to protect their undocumented residents. In a defiant “come and get ’em” move, Boston Mayor Marty Walsh announced that he would open City Hall to undocumented immigrants before he would hand them over to ICE. “If people want to live here, they’ll live here. They can use my office. They can use any office in this building,” he promised.

Sessions explained that his department would “require that jurisdictions seeking or applying for Department of Justice grants to certify compliance with [the executive order], as a condition of receiving those awards.”

Some federal funding is allocated by Congress and not under the jurisdiction of the executive branch, but $2.27 billion in federal funds from all cabinet departments is determined to be at risk, just in the top 10 sanctuary cities.

NPQ has written about the risks of relying on government funding, but this funding drop would be so massive that it would likely force immediate cuts in some areas. It also points to the potential for further harm when, as expected, other federal agencies join the Justice Department and similarly restrict their grantmaking to sanctuary jurisdictions.

In Baltimore alone, the federal government allocates $179 million for civil defense, over $27 million on school improvement, and over $30 million on homeless services. Health services for seniors “are funded solely by federal grants,” according to the city’s 2016 budget report. Nationwide, $460 million for Head Start preschool programs could disappear, along with over $150 million for HIV prevention and treatment.

Hundreds of nonprofit organizations, from homeless shelters to addiction treatment centers, could be affected by these cuts. A study by Professor Tom Wong of UC San Diego and the liberal Center for American Progress showed that several major markers of civic health were better in sanctuary cities. According to the study’s summary,

The Washington Post reported on the study, and pointed out that cooperation between officials and the public often leads to better results. According to the Post,

Wong says more research needs to be done to determine whether a causal effect is at work here. But he said he suspects that, by becoming a sanctuary area and refusing to involve local authorities in deportation matters, a city or county may actually make itself safer. If immigrants who came to the United States illegally fear working with police will lead to deportation, they’re less likely to report crimes and assist with investigations. 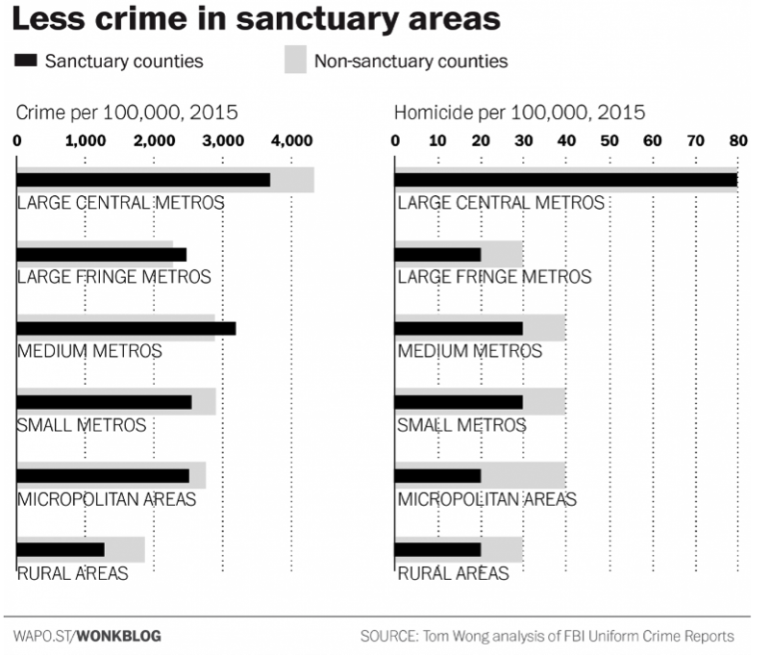 This is a lesson the nonprofit sector knows well: If you engage people, treat them as stakeholders or sharers in a common goal, and recognize their basic humanity, they’re much more likely to see themselves as active community members and stewards.

Mayors of sanctuary cities have said they are prepared to cooperate in the apprehension and processing of immigrants without legal status who are accused of other crimes. Somerville Mayor Joseph Curtatone confirmed, “Somerville does not harbor criminals, and we are in regular communication with and cooperate in the interest of public safety with our federal agencies. No one who commits a violent crime, felony, or serious crimes gets a free pass here. We do cooperate with immigration on those cases.”

Fortunately for Somerville and other cities, those cases represent a minority among undocumented immigrants. The National Bureau of Economic Research found that “immigrants have much lower institutionalization (incarceration) rates than the native born—on the order of one-fifth the rate of natives…the process of migration selects individuals who either have lower criminal propensities or are more responsive to deterrent effects than the average native.”

Statistics show that aggressive immigration enforcement makes cities less safe, and fails to promote the civic engagement and cooperation that helps build strong communities. It certainly will not help cities to lose funding for vital human services—funding that will be extremely difficult, if not impossible, to make up from other sources.

Attorney General Sessions said on Monday, “the American people want and deserve a lawful system of immigration that keeps us safe, and one that serves the national interest.” Indeed we do, but this is not it.—Erin Rubin