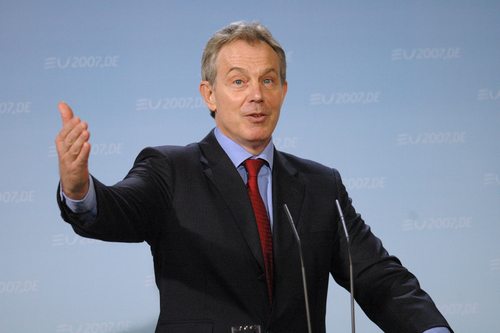 Let’s not forget the small but extremely interesting stories of 2014, such as how former UK Prime Minister Tony Blair happened to get a special achievement award from the US branch of Save the Children, unleashing a hailstorm of condemnations and criticisms from inside and outside of the international charity plus over 122,000 signatures on a petition circulated by the British campaign nonprofit 38 Degrees calling for the honor to Blair to be rescinded.

Neither Blair nor Save has totally fallen out of the news since then, both encountering additional difficulties while still not fully recovered from the “global legacy award” mess.

In the British press, Blair has generated loads of additional controversy for his suggestion that Labour Party leader Ed Miliband was too far left to win against Prime Minister David Cameron and the Tories in the general election. Like the “New Democrats” in the U.S., Blair fashions himself as “New Labour,” sort of pragmatic and centrist, though he quickly walked back his slap against Miliband when Labour activists complained. But Blair’s minor spat with Miliband hardly compares to the continuing brouhaha about his relationship with Save the Children, an important, respected, and legitimate international humanitarian aid charity, and a host of autocrats of less admirable qualify.

For Save, the problems in the UK branch stem from CEO Justin Forsyth’s close relationship with Blair, having served as a special advisor to Blair during his residency at 10 Downing Street. Forsyth and others at Save UK have served in the Blair government. Forsyth and others aver that the U.S. branch of Save gave the award to Blair on its own volition to honor Blair’s charitable work in Africa, though word has come out from Save sources that Forsyth personally delivered the U.S. branch’s invitation to Blair, and others in the organization may have lobbied for his award.

Vanity Fair’s Sarah Ellison chronicles some of the deeper problems involved in the controversy by detailing the combinations and contradictions of Blair’s philanthropic endeavors and his consulting services to various autocrats. As our coverage of Blair has pointed out over the years, Blair has provided advice to such political leaders as Kazakhstan’s Nursultan Nazarbayev, Azerbaijani president Ilham Aliyev, the emir of Kuwait, Egypt’s Mohamed al-Sisi, and Qatari prime minister Hamad bin Jassim bin Jaber Al Thani (apparently on Al Thani’s business dealings) and multinational corporations like JPMorgan Chase (at $3 million a year), the Zurich Insurance Group (at $750,000 annually), and the Abu Dhabi investment fund called Mubadala Development Company (at $1.5 million). Most recently, Blair signed on with a Saudi oil firm, PetroSaudi, founded by one of the Saudi ruling family members to broker deals between the company and China. Blair has quite the challenge of explaining how these business dealings fit his philanthropic persona, having established a number of foundations such as the Tony Blair Faith Foundation and the Tony Blair Africa Governance Initiative (AGI), or do not conflict with his role with the Quartet, the largely failed effort of the U.S., the E.U., Russia, and the United Nations to ease tensions between Israel and Palestine.

Recent revelations (in documents uncovered by the Telegraph) of some of the donors to Blair’s faith and Africa charities include the use of £50,000 of the £1 million donated by hedge fund banker Paolo Pelligrini to pay for the costs of relocating Blair’s AGI office, the receipt of £500,000 for AGI from Bill & Melinda Gates, £320,000 from Ukrainian “oligarch” Victor Pinchuk for the Faith Foundation, £300,000 from a Russian “oligarch” named Oleg Deripaska for Blair’s climate change charity work, £4.5  million from the U.S. Agency for International Development for Blair’s Africa work, and £415,000 from Haim Saban, the Israeli entertainment businessman to the Faith Foundation (plus £650,000 from his wife Cheryl’s foundation to a charity run by Cherie Blair).

The mix of donors has a Bill Clinton-type of feel, except Clinton has never faced calls that he be tried as a war criminal, as Blair is now facing due to the release of the CIA torture report in the United States. Blair has already been dealing with the investigations (the Chilcot inquiries) by the British government over his handling of the Iraq invasion. Now Blair may have to answer questions about what he knew and when he knew it concerning the torture practices revealed by Senator Dianne Feinstein’s committee. Like such U.S. politicians as former Vice President Dick Cheney, Blair may be able to sidestep a formal torture inquiry, but this does nothing but diminish the credibility of Save the Children for having honored Blair as a humanitarian.

Save the Children already has a new crisis on its hands in Sierra Leone. The government of Sierra Leone, where the Ebola outbreak has been at West Africa’s worst, has criticized Save’s operation of an Ebola treatment center in Kerry Town. “Save the Children do not have the expertise,” said Palo Conteh, head of Sierra Leone’s Ebola Response Centre. “That is something we must all accept, and say the Brits got it wrong with Kerry Town, handling over the facility to Save the Children who have never run an Ebola facility.”

Since then, the Save Ebola facility has struggled with a mix of Spanish-speaking Cuban doctors and non-Spanish-speaking personnel from Sierra Leone and the UK, one of whom, a volunteer Scottish nurse from the National Health Service, has been diagnosed with Ebola and returned to the UK.

Save is already struggling with its reputation and brand, having given an award to Blair that 500 of its staff roundly and publicly condemned. Now it has to face the problem of having signed up for Ebola work in Sierra Leone where it seems it was ill prepared and ill suited. It doesn’t look like Blair has turned in his Save the Children award yet, but given Save’s challenges, the former Prime Minister might want to donate a sizable chunk of his political and business consultancy income to help the charity weather its current problems. That might constitute a “special achievement” by the former PM.—Rick Cohen