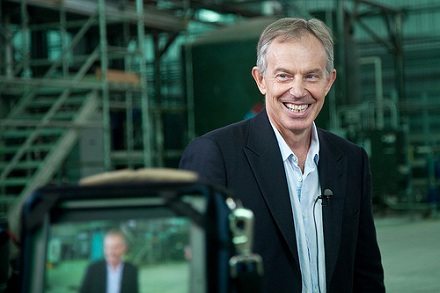 Some former national leaders develop interesting second acts as philanthropists (like Bill Clinton and his various foundation initiatives) or as nonprofit leaders (like Jimmy Carter with his eponymous center). The U.K.’s former Prime Minister Tony Blair apparently imagines himself in the same league, establishing, among other nonprofits, the Faith Foundation, which is designed to increase understanding and tolerance among the world’s major religions.

But when Blair is cavorting around the world, hobnobbing with President Nursultan Nazarbayev, generally seen as a despotic ruler of Kazakhstan, and President Ilham Aliyev, the leader of Azerbaijan who was described in a Wikileaks cable as comparable to Sonny Corleone, it’s not clear whether he is Blair-the-philanthropist or something else—especially when he shows up to willingly plump for these dictators.

When Blair is not representing what The New Republic (TNR) calls his “network of nonprofit smiley-face initiatives,” Blair is the head of Tony Blair Associates, which is on contract with customers ranging from JPMorgan Chase (a $4 million a year contract, according to the Financial Times) to the government of Kuwait. According to TNR, Blair’s contract to improve Nazarbayev’s image is worth up to $13 million. When is Blair visiting with these presidential thugs as a philanthropist promoting democracy and understanding and when is he consulting and raking in the dough for himself? TNR says that before Muammar Qaddafi was killed in Libya, Blair held six private meetings with him and advised his son, Saif Qaddafi, on his Ph.D. thesis.

Peter Oborne, a political commentator for the Daily Telegraph, told TNR writer Ken Silverstein, “Blair is transfixed by money….This sort of behavior is more common in America, where the culture is more commercial and presidents—in particular Bill Clinton—have acted in a financially unscrupulous fashion after leaving office.” Oborne notes that Clinton the philanthropist has also made lots of money consulting with unsavory types, such as facilitating a meeting between Canadian mining business owner Frank Giustra and various interests in Kazakhstan. The difference, according to Oborne, is that Clinton has been “more deft” than Blair. With Kazakhstan, Clinton ended up getting some hefty Giustra contributions to the Clinton Global Initiative. In Blair’s case, as TNR reported, the former PM “went directly on the Kazakh dictator’s payroll.”

We can’t say, based on this one brief article, whether Silverstein, a contributing editor to Harper’s, is on target or overly harsh about Blair. However, for Blair, Clinton, and any other former national leader with a network of nonprofits in his orbit, it is important for the nonprofit sector and the press to pay attention to who these statesmen-cum-philanthropists are meeting with, both for the benefit of their charities and for their personal income earnings. You can’t use an international charity, even one with glowing press, to cover up cavorting with business thugs or oppressive dictators.—Rick Cohen