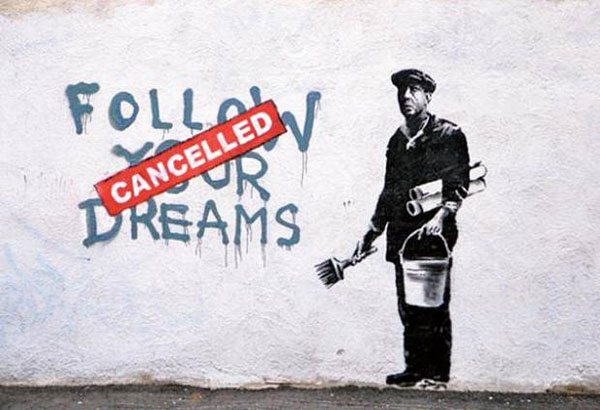 Once again, the Trump Administration is calling for oh-so-deep cuts to public arts and media funding. The budget proposed for fiscal year 2019 would essentially eliminate the Institute of Museum and Library Services (IMLS), decimate the Corporation for Public Broadcasting (CPB) by slashing its budget from $445 million to $15 million, and reduce funding for both the National Endowment for the Arts (NEA) and National Endowment for the Humanities (NEH) by nearly 80 percent. All of these agencies combined—even if fully funded at current rates—represent the merest fraction of a fraction of the overall proposed budget.

An op-ed in The New York Times by Maggie Doherty makes the point that this represents yet another betrayal of the “forgotten people” candidate Trump promised to support, not only by eliminating direct services and programs at the local level (e.g., libraries and museums), but also by penalizing artists who tell the stories of blue-collar America, sometimes thanks to modest grants that help to advance their own underfunded work.

NPQ reported last spring on Trump’s first attempt at “shutting down” the nation’s arts and humanities agencies. That attempt was squashed by Congress, and in fact an additional $2 million in funding was awarded to the NEA for the current fiscal year. Bipartisan support—which acknowledged the impact of federal grants in different types of communities across the United States—carried the day in last year’s debate. But will it work again?

Ronald Reagan tried to eliminate the NEA when he was first elected. Jessie Helms “led a crusade against the arts agency for funding ‘obscene’ art” in the late 1980s. As Doherty notes, conservatives now are less likely to cite the type of art that is being supported and more likely to object to arts and humanities funding simply as an example of wasteful federal spending—or, as television host Tucker Carlson described arts funding last year, as “welfare for rich, liberal elites.” Doherty counters with this:

The truth is the National Endowment for the Arts is the exact opposite: It amplifies the voices of Americans who aren’t the so-called coastal elite, or the aristocratic, or the advantaged. It seeks to diversify the stories we tell and the lives we see. This diversity can take many forms. It can be seen in racial difference and regional difference, in terms of gender and in terms of class.

Often, threats to funding for “the arts” conjure thoughts of visual and performing artists and arts organizations being hurt. But Doherty takes a different tack, highlighting the importance of writers to the national collective consciousness, and in particular, those writers who tell (or have told) the stories of working-class Americans. She cites Raymond Carver, Tillie Olsen, Philip Levine, Ernest J. Gaines, and Bobbie Ann Mason as examples of authors who received Creative Writing Fellowships from the NEA over the last half-century and used that support to lift up working-class people by telling their stories.

These examples of authors, could, of course, be multiplied across virtually every arts discipline and form of self-expression encouraged through arts and humanities funding; and across all of the stories and story-telling initiatives supported by libraries, museums, state humanities councils (which rely on NEH funding), and public radio and television stations across the U.S. (which require a strong CPB).

So here we go again. Having to defend an embarrassingly small investment in the arts, humanities and public media agencies, hoping that once again those who hold the purse strings will understand how much these modestly funded agencies contribute to American life, and why they ought to be valued.—Eileen Cunniffe