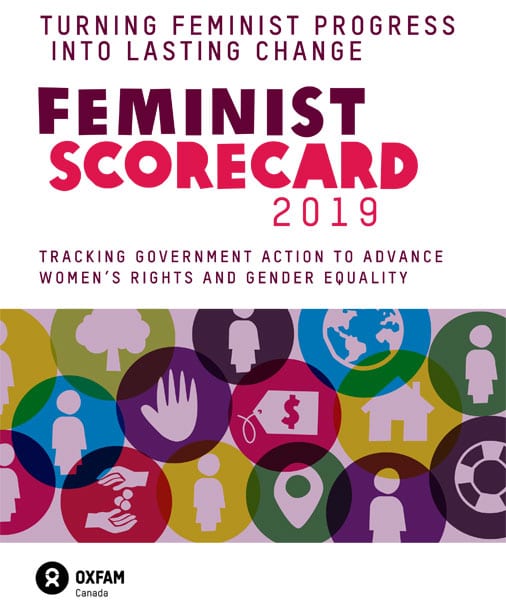 A well-timed report by Oxfam Canada assesses federal progress in Canada on issues of women’s rights and gender equality and expressions of concern in numerous policy areas, including gender-based violence and future directions for investments and approach to child care.

Lauren Ravon, director of policy and campaigns for Oxfam Canada, expressed enthusiasm for some of the concrete achievements to date. “Some of the major milestones that we hit in 2018 are really significant,” she said. “We got pay-equity legislation, gender-budgeting legislation—these are things that will make a difference in people’s lives.”

Ravon pointed to outcomes from the Poverty Reduction Act (as discussed by NPQ last week), the creation of the Department of Women and Gender Equality, and the doubling of funding for Canadian women’s movements as important for the advancement of women’s rights in Canada.

These positive sentiments are tempered with concerns about long-term impact:

The one major problem that we’re seeing is that these new initiatives don’t have the bold investments that would be required to achieve long-lasting change. So yes, there’s lots of initiative being taken, but there’s not enough money to actually resource these initiatives and make sure they can impact the most people.

Improvements to child care and reduction of gender-based violence are two of the key concerns identified in the scorecard, and this is echoed by the Canadian Centre for Policy Alternatives (CCPA) report, The Best and Worst Places to be a Woman in Canada 2019, which looks at women’s issues with a focus on municipal data.

The CCPA report is also supportive of initiatives introduced at the federal level to improve gender equity but notes that disparities continue to exist in major cities across the country. For example, while women are now more equally represented in the federal cabinet, they continue to be underrepresented in local governments, making up just one-third of municipal councilors and only five mayors (out of the 26 municipalities in the report).

CCPA senior researcher Katherine Scott also finds “very troubling” indications that levels of violence against women are on the rise, and also points to ongoing issues with employment fairness, noting that women continue to be paid less than their male counterparts and are still not promoted to upper management positions as often as men.

“One of the critical issues, which remains important certainly for women’s rates of employment, is child care,” she added. “At this stage, Canada is one of the only OECD (Organisation for Economic Co-operation and Development) countries that does not have a national, sustained commitment to childcare, to building a national system, and it’s an extraordinary barrier to women. That’s certainly one policy area that would translate to more employment and more economic benefit for the country as a whole.” (Quebec has a provincial model, but it has not been extended nationally).

With a looming March 19th federal budget, Oxfam Canada and other nonprofit organizations with a focus on women’s issues are sure to put a spotlight on child care issues and will attempt to ensure that this continues in the lead-up to the October 21st federal election. The Oxfam report, in giving a “yellow” (some progress) grade to “Investing in the Care Economy,” has positioned these concerns not only as a gender fairness issue, but also as having implications for the overall economic health of the country.

Responsibility for unpaid care work is one of the biggest hurdles to women’s economic equality. Women around the world spend 16.4 billion hours a year doing housework and taking care of children and sick and elderly family members. If this amount of work was carried out by a single company, it would make an annual profit of $13.2 trillion, 43 times that of Apple. Yet, unpaid care work keeps many women trapped in poverty by preventing them from pursuing employment and educational opportunities. It not only hurts women but has major implications for economic growth.

While there is little disagreement about the need for increased access to child care, debate over approach (and cost) is expected to be intense and may break down in a similar fashion to what is playing out currently at the provincial level. In Ontario, the Progressive Conservative government of Premier Doug Ford has introduced an omnibus bill, the Restoring Ontario’s Competitiveness Act, which includes changes to child care regulations that took many advocates by surprise. Coupled with a previous move that increase access to public dollars by for-profit child care providers, the non-profit child care sector is concerned about what they see as a trend to lower cost, less regulated private sector solutions, what detractors describe as “big box child care.”

The new omnibus bill will impact on the regulation of smaller private child care services. After a number of incidents with private operators of home day care services, including several deaths, the previous Liberal government in Ontario introduced several restrictions back in 2014.

Commenting on the easing of these restrictions, Ontario’s Minister of Economic Development Todd Smith described the 2014 decision as a “knee-jerk reaction” and said the proposed changes would give parents more options and help them get back into the workforce faster. “This is something that’s not going to cost government anything but it’s going to create much needed spaces in the child-care sector,” he said. “It’s going to allow young families who are having children the ability to get back to work earlier.”

Contrast this message with opposition parties and some child care experts describing these changes as “reckless” and “going backwards.” It seems the battle lines have been drawn over two distinctly different approaches to expansion of child care access: greater public-dollar investment in regulated nonprofit child care versus expansion through lowered costs and more participation from the for-profit sector.— Keenan Wellar