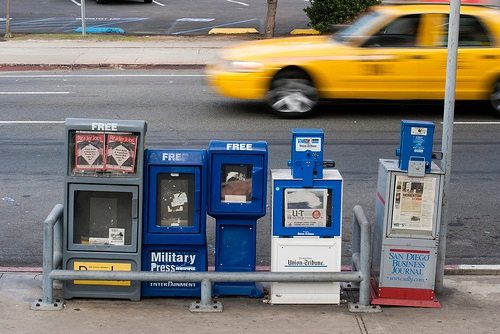 Malin Burnham, a prominent San Diego philanthropist who believes deeply in engaged communities, has launched a bid to buy U-T San Diego (formerly known as the San Diego Union-Tribune) and turn it into a large nonprofit news site. Burnham is currently applying for nonprofit status and apparently expects that to be granted in between 30 and 90 days. Some news organizations have waited far longer than that but we imagine Mr. Burnham has the contacts to grease the wheels a bit.

This would not be the first nonprofit connection for U-T San Diego, according to the San Diego Reader/ 09.23.2014. Current publisher Douglas Manchester launched a “collaborative project of editorials and independent commentaries” created “in partnership” with the Franklin Center, a Virginia nonprofit tied to Charles and David Koch, saying that the paper “boldly hoped [it] will help change the direction of California before the Golden State becomes a failed state.” At that time, the San Diego Reader asked, “What exactly is the Franklin Center and precisely what role is it playing in the U-T crusade? Depending on who’s doing the talking, Franklin is either a faithful watchdog of big government or a right-wing plot to destroy legitimate journalism.”

But a report posted online by the Columbia Journalism Review revealed that in 2011, “fully 95 percent of the Franklin Center’s revenues came from a charity called Donors Trust, whose top contributors were the Koch brothers.” The Franklin Center’s Vice President of Journalism, Steven Greenhut, wrote in response to questions about the influence of their donors that “Yes, Franklin Center is funded by donors and, no, we do not publish their names to respect their privacy.”

A big portion of the field of nonprofit journalism disapproves of taking money from anonymous donors specifically because of the problem of potential undercover tainting; in fact, the John S. and James L. Knight Foundation, one of the nation’s most active funders of new journalism, requires journalism and media grantees to disclose the identity of any donor making a contribution of $5,000 or more. If Burnham does buy U-T San Diego, at least it will be clear who is bankrolling the endeavor.

According to a recent interview, Burnham does intend to try to make money at publishing, but his intent would be to reinvest those proceeds as grants to nonprofits. (He is, by the way, heavily involved with the San Diego Foundation along with many other prominent local nonprofits.) He is Republican and politically involved, but says that he would hope to develop an editorial stance that was nonpartisan.

Manchester has been quoted as saying that the deal is not done and chickens should not be counted. We will be interested to see whether the IRS will come through on the expected timeline and if Burnham will turn this into a venture that makes a surplus that can be invested in grants.—Ruth McCambridge