U.S. Ranks with Haiti, the Congo, and Yemen on Labor Rights—Really? 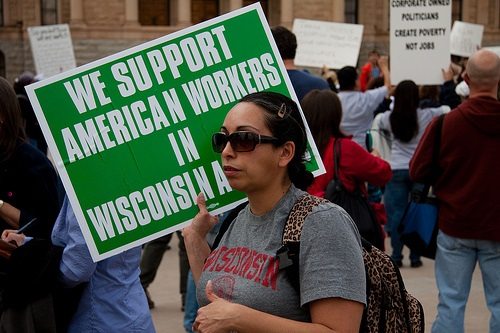 As much as nonprofits talk about human rights, it is very rare to hear U.S. nonprofits say much about labor rights. There is a skittishness about labor organizing among nonprofits. Perhaps it is because the nonprofit world, other than hospitals and universities, isn’t significantly affected by the presence of labor unions. Perhaps it is because much of the private funding for nonprofits often comes directly or indirectly from corporate leaders, who themselves are not particularly supportive of unions in their shops, regardless of their stated progressive philanthropic goals and values.

It strikes this newswire writer that the rights of workers should be a legitimate and high priority concern for nonprofits, particularly those that profess an interest in and commitment to addressing socioeconomic inequities.

This map from the International Trade Union Confederation ranks 139 countries against nearly 100 indicators of workers’ rights might create a stir among some readers. The U.S. doesn’t rank as the nation with the strongest labor protections—far from it.

The countries with only “irregular violations of rights” (yellow) are Scandinavian and Central European nations—and Uruguay and South Africa. Denmark was the only country to get a perfect score as measured against all 97 indicators of workers’ rights. The second tier of countries includes Japan, Switzerland, and Russia. The U.S., surprisingly, is in the fourth tier, ranked with Iran, Iraq, Mexico, Pakistan, and Myanmar. The ITUC report characterizes these countries as places where unions have reported “systematic violations against workers…[and where] the government and/or companies are engaged in a serious effort to crush the collective voice of workers putting fundamental rights under continuous threat.”

With corporate power in the U.S. on the rise, it isn’t surprising that the ITUC finds workers’ rights on the decline. It might be that the ITUC has emphasized the continuing decline of union membership in the private sector and the past few years of conservative political attempts to restrict public sector unionization. Are nonprofits concerned about the decrease of unionization in the U.S. or the roles of state governments in subtly or sometimes not so subtly opposing union efforts, such as the United Auto Workers’ campaign to unionize the new Volkswagen plant in Tennessee?

One hears a lot from nonprofits and foundations about poverty, living wages, unemployment, and more, but rarely much about labor organizing. Whether one buys or rejects the ITUC analysis, it suggests an avenue of political organizing, rather than charitable good works for working people moving into—or not falling out of—the middle class. “Your working man expects something is his right, not as your gift!” Jedediah Leland said to Charles Foster Kane in Citizen Kane. “Charlie, when your precious underprivileged really get together, oh boy!” According to the ITUC analysis, workers in the U.S. are lagging behind in legal protections for the underprivileged, who might really want to get together to argue for their rights.—Rick Cohen